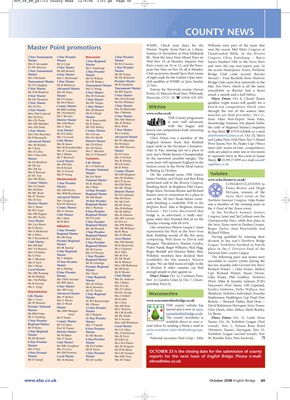 WMBC. Check your diary for the Williams were part of the team that

Sunday 16 November at West Midlands Llandrindod Wells. In the Riviera

Mr JJ Callaghan Mr B Holloway Tournament Master Mr R Gembicki 22 Nov. May Sim Pairs, which is all the more

through the rest of the season; later

Mrs IJ Lilley Mrs IC Lawrence Mrs C Mitchell Master ships in Pau, missing out on a place in clubs are asked to enter one or two teams

performed well in the Riviera Congress, CONGRATULATIONS to

McGann, winners of the

one of the ‘All Star’ finals before event- Northern Summer Congress. Giles Foster

game when they finished first of on the Championship Pairs, while first place in

Tuesday evening with 69.44%. the Swiss Teams went to Pauline Cooper,

Regional Master final, finishing second of the five areas Having qualified by winning their

League. We can field teams of eight in the last two months: John Gerrard Sim Pairs: