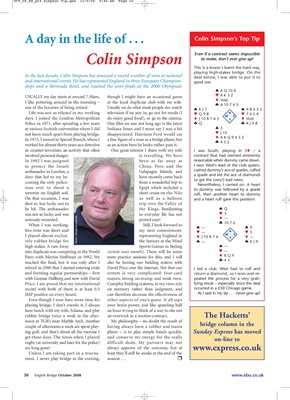 Even if a contract seems impossible

Colin Simpson to make, don’t ever give up!

This is a lesson I learnt the hard way,

playing high-stakes bridge. On the

In the last decade, Colin Simpson has amassed a record number of wins at national deal below, I was able to put it to

and international events. He has represented England in three European Champion- good use:

ships and a Bermuda Bowl, and reached the semi-finals at the 2000 Olympiad.

USUALLY my day starts at around 7.30am. though I might have an occasional game ♥ AK32

I like pottering around in the morning – at the local duplicate club with my wife.

Life was not so relaxed in my working television if we stay in, go out for meals (I ♥ Q98 N

not learn much apart from playing bridge. disappointed: Harrison Ford would cut ♥ J 10

In 1973, I moved to Special Branch, where I a fine figure of a man as a bridge player, but

worked for almost thirty years as a detective as an action hero he looks rather past it.

in counter-terrorism, an activity that often One great interest I share with my wife I was South, playing in 5♦ – a

involved personal danger. is travelling. We have contract that had seemed eminently

In 1982 I was assigned been as far away as reasonable when dummy came down.

to protect the Israeli China, Peru and the I won West’s lead of the club queen,

ambassador in London, a Galapagos Islands, and cashed dummy’s ace of spades, ruffed

a spade and led the ace of diamonds

duty that led to my be- have recently come back

coming the only police- from a wonderful trip to

Nevertheless, I carried on. A heart

terrorist on English soil. short cruise on the Nile ruff, then another heart to dummy

On that occasion, I was as well as a balloon and a heart ruff gave this position:

shot at, but lucky not to trip over the Valley of

be hit. The ambassador the Kings. Readjusting ♠ Q

was not so lucky, and was to everyday life has not ♥ 3

When I was working, Still, I look forward to

vely rubber bridge for the Seniors at the Mind ♣ — ♣ KJ9

into duplicate was competing in the World (article next month). There will be some ♥ —

Pairs with Martin Hoffman in 1982. We team practice sessions for this, and I will ♦ KQ9

reached the final, but it was only after I also be honing our bidding system with

retired in 2000 that I started entering trials David Price over the internet. Not that our I led a club. West had to ruff and

and forming regular partnerships – first system is very complicated: four-card return a diamond, so I won and re-

with Gunnar Hallberg and now with David majors, strong no-trump and weak twos. peated the process for a very grati-

Price. I am proud that my international Complex bidding systems, in my view, rely fying result – especially since the deal

record with both of them is at least 0.5 on memory rather than judgment, and occurred in a £50 Chicago game.

IMP positive on every board. can therefore decrease the effectiveness of As I said in my tip . . . never give up!

Even though I now have more time for other aspects of one’s game. It all saps

playing bridge, I don’t overdo it. I always your brain power, just like spending half

have lunch with my wife, Juliana, and play an hour trying to think of a way to eke out

rubber bridge twice a week in the after- an overtrick in a routine contract. The Hacketts’

noon at TGR’s near Marble Arch. Another My philosophy – no doubt the result of

ing golf, and that’s about all the exercise I player – is to play simple hands quickly, Sunday Express has moved

get these days. The times when I played and conserve my energy for the really

rugby (at university and later for the police) difficult deals. My partners may not

Unless I am taking part in a tourna-

always approve of the outcome, but at

least they’ll still be awake at the end of the

ment, I never play bridge in the evening, session . . .