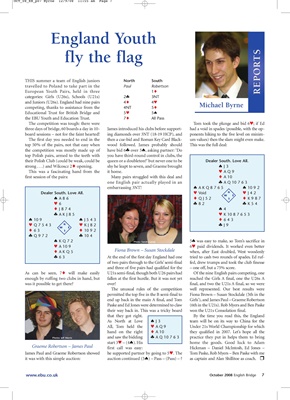 THIS summer a team of English juniors North South

travelled to Poland to take part in the Paul Robertson

competing, thanks to assistance from the 4NT 5♦ Michael Byrne

Educational Trust for British Bridge and 5♥ 5♠

the EBU Youth and Education Trust. 7♦ All Pass

The competition was tough: there were Tom took the plunge and bid 6♥; if Ed

three days of bridge, 60 boards a day in 10- James introduced his clubs before support- had a void in spades (possible, with the op-

board sessions – not for the faint hearted! ing diamonds over 3NT (18-19 HCP), and ponents hiking to the five level on minim-

The first day you needed to end in the then a cue-bid and Roman Key Card Black- um values) then the slam might even make.

top 50% of the pairs, not that easy when wood followed. James probably should This was the full deal:

the competition was mostly made up of have bid 6♣ over 5♠, asking partner: ‘Do

top Polish pairs, armed to the teeth with you have third-round control in clubs, the

their Polish Club (could be weak, could be queen or a doubleton?’ but never one to be Dealer South. Love All.

This was a fascinating hand from the it home. ♥AQ9

first session of the pairs: Many pairs struggled with this deal and ♦ A 10

♠KQ72 Photo: Sandra Landy 5♠ was easy to make, so Tom’s sacrifice in

♣63 At the end of the first day England had one tried to cash two rounds of spades. Ed ruf-

of two pairs through to the Girls’ semi-final fed, drew trumps and took the club finesse

and three of five pairs had qualified for the – one off, but a 75% score.

As can be seen, 7♦ will make easily U21s semi-final, though both U26 pairs had Of the nine English pairs competing, one

enough by ruffing two clubs in hand, but fallen at the first hurdle. But it was not yet reached the Girls A final, one the U26s A

was it possible to get there? over! final, and two the U21s A final, so we were

The unusual rules of the competition well represented. Our best results were

end up back in the main A final, and Tom Girls’), and James Paul – Graeme Robertson

Paske and Ed Jones were determined to claw (6th in the U21s). Rob Myers and Ben Paske

their way back in. This was a tricky board won the U21s Consolation final.

that they got right. By the time you read this, the England

All, Tom held the ♥ AQ9 Under 21s World Championship for which

Photos: Jeff Morris and saw the bidding ♣ A Q 10 7 6 3 practice they put in helps them to bring

James Paul and Graeme Robertson showed he supported partner by going to 5♥. The Tom Paske, Rob Myers – Ben Paske with me

it was with this simple auction: auction continued (5♠) – Pass – (Pass) – ? as captain and Alan Shillitoe as coach.