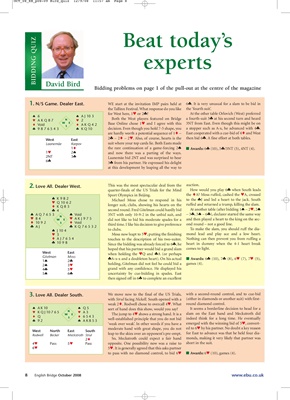 1. N/S Game. Dealer East. WE start at the invitation IMP pairs held at 6♣. It is very unusual for a slam to be bid in

the Tallinn Festival. What response do you like the ‘fourth suit’.

for West here, 1♥ or 2♣? At the other table Orlovich (West) preferred

♦ AKQ42 Base Online chose 1♥ and I agree with this 3NT from East. Even though this might be on

Laanemäe Karpov suit where your top cards lie. Both Easts made

2NT 3♣ Laanemäe bid 2NT and was surprised to hear

3♣ from his partner. He expressed his delight

at this development by leaping all the way to

2. Love All. Dealer West. This was the most spectacular deal from the auction.

Sport Olympics in Beijing. the ♦A? Moss ruffed, cashed the ♥A, crossed

♠ K982 Michael Moss chose to respond in his to the ♣J and led a heart to the jack. South

♦ KQ83 longer suit, clubs, showing his hearts on the ruffed and returned a trump, killing the slam.

third time. I like his decision to give preference

♥ 3 Moss now leapt to 5♥, putting the finishing mond lead and play ace and a low heart.

♦ AJ7654 touches to the description of his two-suiter. Nothing can then prevent you from ruffing a

hoped that his partner would bid a grand slam comes to light.

West East when holding the ♥Q and ♣A (or perhaps

4♣ 5♥ grand with any confidence. He displayed his

5♠ 6♣ uncertainty by cue-bidding in spades. East

then signed off in 6♣ to complete an excellent

3. Love All. Dealer South. We move now to the final of the US Trials, with a second-round control, and to cue-bid

with Strul facing Nickell. South opened with a (either in diamonds or another suit) with first-

weak 2♦. Rodwell chose to overcall 4♥. What round diamond control.

♠ A K 10 ♠ Q5 sort of hand does this show, would you say? It seems a borderline decision to head for a

W E The jump to 4♥ shows a strong hand. It is a slam on the East hand and Meckstroth did

well-established principle that you do not bid indeed think for a long time. He eventually

‘weak over weak’. In other words if you have a emerged with the winning bid of 5♥, convert-

moderate hand with great shape, you do not ed to 6♥ by his partner. No doubt a key reason

Rodwell Becker Meckstroth Strul leap to the skies over an opponent’s pre-empt. for East to advance was that he held four dia-

2♦ So, Meckstroth could expect a fair hand monds, making it very likely that partner was

4♥ Pass 5♥ Pass opposite. One possibility now was a raise to short in the suit.

6♥ 5♥. It is generally agreed that this asks partner