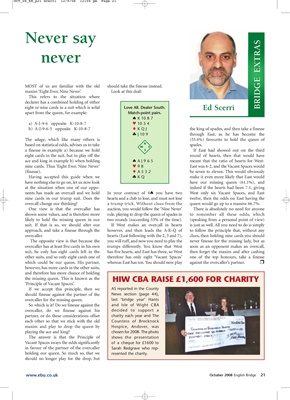 MOST of us are familiar with the old should take the finesse instead.

maxim ‘Eight Ever, Nine Never’. Look at this deal:

This refers to the situation where

declarer has a combined holding of either

eight or nine cards in a suit which is solid Love All. Dealer South. Ed Scerri

apart from the queen, for example: Match-point pairs.

The adage, which like many others is (55.6%) favourite to hold the queen of

based on statistical odds, advises us to take W E

eight cards in the suit, but to play off the round of hearts, then that would have

(finesse). ♦ A532 be seven to eleven. This would obviously

at the situation when one of our oppo- indeed if the hearts had been 7-1, giving

nents has made an overcall and we hold In your contract of 4♠ you have two West only six Vacant Spaces, and East

nine cards in our trump suit. Does the hearts and a club to lose, and must not lose twelve, then the odds on East having the

overcall change our thinking? a trump trick. Without clues from the queen would go up to a massive 66.7%.

One view is that the overcaller has auction, you would follow the ‘Nine Never’ There is absolutely no need for anyone

shown some values, and is therefore more rule, playing to drop the queen of spades in to remember all these odds, which

likely to hold the missing queen in our two rounds (succeeding 53% of the time). (speaking from a personal point of view)

suit. If that is so, we should alter our If West makes an overcall in hearts is just as well. All you need to do is simply

approach, and take a finesse through the however, and then leads the A-K-Q of to follow the principle that, without any

overcaller. hearts (East following with the 2, 3 and 7), clues, then holding nine cards you should

The opposite view is that because the you will ruff, and now you need to play the never finesse for the missing lady, but as

overcaller has at least five cards in his own trumps differently. You know that West soon as an opponent makes an overcall,

suit, he only has eight cards left in the has five hearts, and East has three, so West then forget the maxim and after cashing

other suits, and so only eight cards one of therefore has only eight ‘Vacant Spaces’ one of the top honours, take a finesse

which could be our queen. His partner, whereas East has ten. You should now play against the overcaller’s partner.

however, has more cards in the other suits,

and therefore has more chance of holding

the missing queen. This is known as the

If we accept this principle, then we AS reported in the County

should finesse against the partner of the News section (page 44),

So which is it? Do we finesse against the and Isle of Wight CBA

overcaller, do we finesse against his decided to support a

partner, or do these considerations offset charity each year and The

maxim and play to drop the queen by Hospice, Andover, was

playing the ace and king? chosen for 2008. The photo

The answer is that the Principle of shows the presentation

holding our queen. So much so, that we resented the charity.

should no longer play for the drop, but