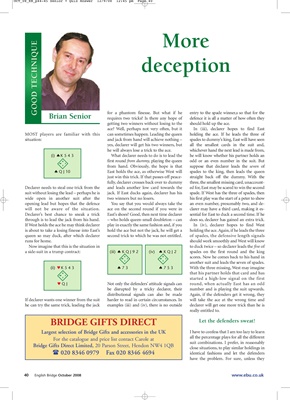 for a phantom finesse. But what if he entry to the spade winner,s so that for the

Brian Senior requires two tricks? Is there any hope of defence it is all a matter of how often they

getting two winners without losing to the should hold up the ace.

ace? Well, perhaps not very often, but it In (iii), declarer hopes to find East

MOST players are familiar with this can sometimes happen. Leading the queen holding the ace. If he leads the three of

situation: and jack from hand will achieve nothing – spades to dummy’s king, East will have seen

yes, declarer will get his two winners, but all the smallest cards in the suit and,

he will always lose a trick to the ace. whichever hand the next lead is made from,

first round from dummy, playing the queen odd or an even number in the suit. But

from hand. Obviously, the hope is that suppose that declarer leads the seven of

♠ Q J 10 East holds the ace, as otherwise West will spades to the king, then leads the queen

just win this trick. If that passes off peace- straight back off the dummy. With the

fully, declarer crosses back over to dummy three, the smallest missing card, unaccount-

Declarer needs to steal one trick from the and leads another low card towards the ed for, East may be scared to win the second

suit without losing the lead – perhaps he is jack. If East ducks again, declarer has his spade. If West has the three of spades, then

wide open in another suit after the two winners but no losers. his first play was the start of a peter to show

opening lead but hopes that the defence You say that you would always take the an even number, presumably two, and de-

will not be aware of the situation. ace on the second round if you were in clarer may have a third card, making it es-

Declarer’s best chance to sneak a trick East’s shoes? Good, then next time declarer sential for East to duck a second time. If he

through is to lead the jack from his hand. – who holds queen-small doubleton – can does so, declarer has gained an extra trick.

If West holds the ace he may think declarer play in exactly the same fashion and, if you In (iv), declarer hopes to find West

is about to take a losing finesse into East’s hold the ace but not the jack, he will get a holding the ace. Again, if he leads the three

queen so may duck, after which declarer second trick to which he was not entitled. of spades, the defensive length signals

runs for home. should work smoothly and West will know

scores. Now he comes back to his hand in

another suit and leads the seven of spades.

that his partner holds that card and has

started a high-low signal on the first

♥QJ Not only the defenders’ attitude signals can round, when actually East has an odd

be disrupted by a tricky declarer, their number and is playing the suit upwards.

distributional signals can also be made Again, if the defenders get it wrong, they

If declarer wants one winner from the suit harder to read in certain circumstances. In will take the ace at the wrong time and

he can try the same trick, leading the jack examples (iii) and (iv), there is no outside declarer will get one more trick than he is

suit combinations. I prefer, in reasonably

have the problem. For sure, unless they