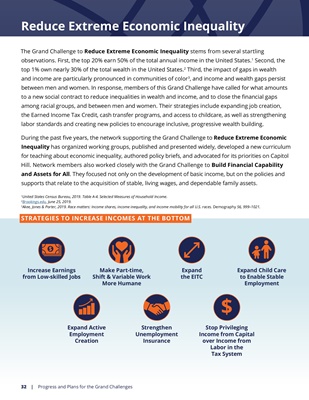 observations. First, the top 20% earn 50% of the total annual income in the United States.1 Second, the

top 1% own nearly 30% of the total wealth in the United States.2 Third, the impact of gaps in wealth

and income are particularly pronounced in communities of color3, and income and wealth gaps persist

between men and women. In response, members of this Grand Challenge have called for what amounts

to a new social contract to reduce inequalities in wealth and income, and to close the financial gaps

among racial groups, and between men and women. Their strategies include expanding job creation,

the Earned Income Tax Credit, cash transfer programs, and access to childcare, as well as strengthening

During the past five years, the network supporting the Grand Challenge to Reduce Extreme Economic

for teaching about economic inequality, authored policy briefs, and advocated for its priorities on Capitol

and Assets for All. They focused not only on the development of basic income, but on the policies and

supports that relate to the acquisition of stable, living wages, and dependable family assets.

STRATEGIES TO INCREASE INCOMES AT THE BOTTOM

32 | Progress and Plans for the Grand Challenges