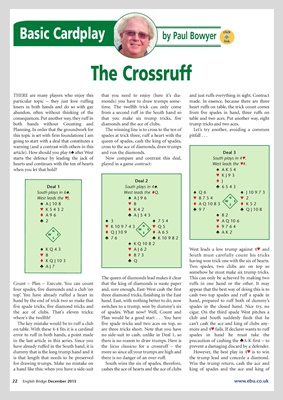 THERE are many players who enjoy this that you need to enjoy (here it’s dia- and just ruffs everything in sight. Contract

particular topic – they just love ruffing monds) you have to draw trumps some- made. In essence, because there are three

losers in both hands and do so with gay time. The twelfth trick can only come heart ruffs on table, the trick count comes

abandon, often without thinking of the from a second ruff in the South hand so from five spades in hand, three ruffs on

both hands without Counting and diamonds and the ace of clubs. trump tricks and two aces.

Planning. In order that the groundwork for The winning line is to cross to the ten of Let’s try another, avoiding a common

this topic is set with firm foundations I am spades at trick three, ruff a heart with the pitfall . . .

going to start with a deal that constitutes a queen of spades, cash the king of spades,

warning (and a contrast with others in this cross to the ace of diamonds, draw trumps

article). How should you play 6´ after West and run the diamonds. Deal 3

starts the defence by leading the jack of Now compare and contrast this deal, South plays in 4™.

hearts and continues with the ten of hearts played in a game contract: West leads the ™4.

® AJ7 Two spades, two clubs are on top so

Count – Plan – Execute. You can count that the king of diamonds is waste paper ruffs in one hand or the other. It may

four spades, five diamonds and a club ‘on and, sure enough, East-West cash the first appear that the best way of doing this is to

top’. You have already ruffed a heart in three diamond tricks, finishing in the East cash two top spades and ruff a spade in

hand by the end of trick two so make that hand. East, with nothing better to do, now hand, prepared to ruff both of dummy’s

five spade tricks, five diamond tricks and switches to a trump, won by dummy’s six spades in the closed hand. Nice try, no

the ace of clubs. That’s eleven tricks; of spades. What now? Well, Count and cigar. On the third spade West pitches a

where’s the twelfth? Plan would be a good start . . . You have club and South suddenly finds that he

The key mistake would be to ruff a club five spade tricks and two aces on top, so can’t cash the ace and king of clubs any-

on table. With these 4-4 fits it is a cardinal are three tricks short. Note that you have more and 4™ fails. If declarer wants to ruff

error to ruff in both hands, a point made no side-suit to cash, unlike in Deal 1, so spades in hand he must take the

in the last article in this series. Since you there is no reason to draw trumps. Here is precaution of cashing the ®A-K first – to

have already ruffed in the South hand, it is the locus classicus for a crossruff – the prevent a damaging discard by a defender.

dummy that is the long trump hand and it more so since all your trumps are high and However, the best play in 4™ is to win

is that length that needs to be preserved there is no danger of an over-ruff. the trump lead and concede a diamond.

for drawing trumps. Make no mistake on South wins the six of spades, therefore, Win the trump return, cash the ace and