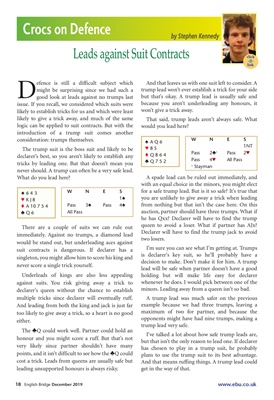 efence is still a difficult subject which

good look at leads against no trumps last

issue. If you recall, we considered which suits were

likely to establish tricks for us and which were least

likely to give a trick away, and much of the same

logic can be applied to suit contracts. But with the

introduction of a trump suit comes another

The trump suit is the boss suit and likely to be

declarer's best, so you aren't likely to establish any

tricks by leading one. But that doesn't mean you

never should. A trump can often be a very safe lead.

What do you lead here? Leads against Suit Contracts

There are a couple of suits we can rule out

immediately. Against no trumps, a diamond lead

would be stand out, but underleading aces against

suit contracts is dangerous. If declarer has a

singleton, you might allow him to score his king and

never score a single trick yourself.

against suits. You risk giving away a trick to

declarer's queen without the chance to establish

And leading from both the king and jack is just far

too likely to give away a trick, so a heart is no good

The ®Q could work well. Partner could hold an

honour and you might score a ruff. But that's not

very likely since partner shouldn't have many

points, and it isn't difficult to see how the ®Q could

cost a trick. Leads from queens are usually safe but

And that leaves us with one suit left to consider. A

trump lead won't ever establish a trick for your side

but that's okay. A trump lead is usually safe and

because you aren't underleading any honours, it

won't give a trick away.

would you lead here?

A spade lead can be ruled out immediately, and

with an equal choice in the minors, you might elect

for a safe trump lead. But is it so safe? It's true that

you are unlikely to give away a trick when leading

from nothing but that isn't the case here. On this

auction, partner should have three trumps. What if

he has Qxx? Declarer will have to find the trump

queen to avoid a loser. What if partner has AJx?

Declarer will have to find the trump jack to avoid

I'm sure you can see what I'm getting at. Trumps

is declarer's key suit, so he'll probably have a

decision to make. Don't make it for him. A trump

lead will be safe when partner doesn't have a good

holding but will make life easy for declarer

whenever he does. I would pick between one of the

minors. Leading away from a queen isn't so bad.

A trump lead was much safer on the previous

example because we had three trumps, leaving a

maximum of two for partner, and because the

I've talked a lot about how safe trump leads are,

but that isn't the only reason to lead one. If declarer

has chosen to play in a trump suit, he probably

plans to use the trump suit to its best advantage.

And that means ruffing things. A trump lead could

get in the way of that.