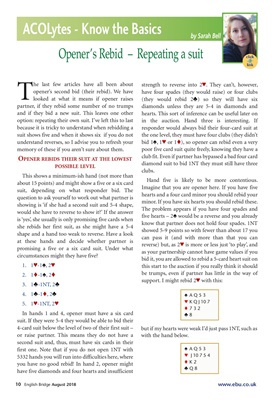 he last few articles have all been about

opener's second bid (their rebid). We have

looked at what it means if opener raises

partner, if they rebid some number of no trumps

and if they bid a new suit. This leaves one other

option: repeating their own suit. I've left this to last

because it is tricky to understand when rebidding a

understand reverses, so I advise you to refresh your

memory of these if you aren't sure about them.

OPENER REBIDS THEIR SUIT AT THE LOWEST

This shows a minimum-ish hand (not more than

suit, depending on what responder bid. The

question to ask yourself to work out what partner is

showing is 'if she had a second suit and 5-4 shape,

would she have to reverse to show it?' If the answer

is 'yes', she usually is only promising five cards when

she rebids her first suit, as she might have a 5-4

shape and a hand too weak to reverse. Have a look

at these hands and decide whether partner is

promising a five or a six card suit. Under what

In hands 1 and 4, opener must have a six card

suit. If they were 5-4 they would be able to bid their

or raise partner. This means they do not have a

second suit and, thus, must have six cards in their

first one. Note that if you do not open 1NT with

5332 hands you will run into difficulties here, where

you have no good rebid! In hand 2, opener might

have five diamonds and four hearts and insufficient

strength to reverse into 2™. They can't, however,

have four spades (they would raise) or four clubs

(they would rebid 2®) so they will have six

diamonds unless they are 5-4 in diamonds and

hearts. This sort of inference can be useful later on

in the auction. Hand three is interesting. If

responder would always bid their four-card suit at

the one level, they must have four clubs (they didn't

poor five card suit quite freely, knowing they have a

club fit. Even if partner has bypassed a bad four card

diamond suit to bid 1NT they must still have three

Hand five is likely to be more contentious.

Imagine that you are opener here. If you have five

hearts and a four card minor you should rebid your

minor. If you have six hearts you should rebid these.

The problem appears if you have four spades and

five hearts - 2´ would be a reverse and you already

know that partner does not hold four spades. 1NT

showed 5-9 points so with fewer than about 17 you

can pass it (and with more than that you can

as your partnership cannot have game values if you

bid it, you are allowed to rebid a 5-card heart suit on

this start to the auction if you really think it should

be trumps, even if partner has little in the way of

but if my hearts were weak I'd just pass 1NT, such as

with the hand below.