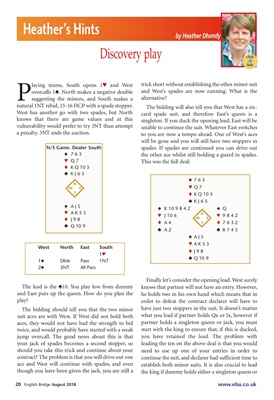 suggesting the minors, and South makes a

West has another go with two spades, but North

knows that there are game values and at this

vulnerability would prefer to try 3NT than attempt

a penalty. 3NT ends the auction.

The lead is the ´10. You play low from dummy

and East puts up the queen. How do you plan the

The bidding should tell you that the two minor

suit aces are with West. If West did not hold both

aces, they would not have had the strength to bid

twice, and would probably have started with a weak

jump overcall. The good news about this is that

your jack of spades becomes a second stopper, so

should you take this trick and continue about your

contract? The problem is that you will drive out one

ace and West will continue with spades, and even

though you have been given the jack, you are still a

trick short without establishing the other minor suit

and West's spades are now running. What is the

The bidding will also tell you that West has a sixcard

spade suit, and therefore East's queen is a

singleton. If you duck the opening lead, East will be

unable to continue the suit. Whatever East switches

to you are now a tempo ahead. One of West's aces

will be gone and you will still have two stoppers in

spades. If spades are continued you can drive out

the other ace whilst still holding a guard in spades.

This was the full deal:

knows that partner will not have an entry. However,

he holds two in his own hand which means that in

order to defeat the contract declarer will have to

have just two stoppers in the suit. It doesn't matter

what you lead if partner holds Qx or Jx, however if

partner holds a singleton queen or jack, you must

start with the king to ensure that, if this is ducked,

you have retained the lead. The problem with

leading the ten on the above deal is that you would

need to use up one of your entries in order to

continue the suit, and declarer had sufficient time to

establish both minor suits. It is also crucial to lead

the king if dummy holds either a singleton queen or