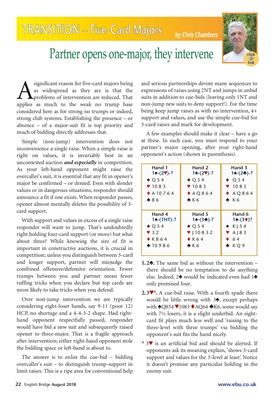 significant reason for five-card majors being

as widespread as they are is that the

problems of intervention are reduced. That

applies as much to the weak no trump base

considered here as for strong no trumps or indeed,

absence - of a major-suit fit is top priority and

much of bidding directly addresses that.

Simple (non-jump) intervention does not

inconvenience a single raise. When a simple raise is

right on values, it is invariably best in an

uncontested auction and especially in competition.

overcaller's suit, it is essential that any fit in opener's

major be confirmed - or denied. Even with slender

values or in dangerous situations, responder should

announce a fit if one exists. When responder passes,

With support and values in excess of a single raise

right holding four-card support (or more) but what

about three? While knowing the size of fit is

important in constructive auctions, it is crucial in

competition; unless you distinguish between 3-card

and longer support, partner will misjudge the

trumps between you and partner mean fewer

ruffing tricks when you declare but top cards are

more likely to take tricks when you defend.

Over non-jump intervention we are typically

would have bid a new suit and subsequently raised

opener to three-major. That is a fragile approach

after intervention; either right-hand opponent stole

the bidding space or left-hand is about to.

The answer is to enlist the cue-bid - bidding

limit raises. This is a ripe area for conventional help

and serious partnerships devote many sequences to

expressions of raises using 2NT and jumps in unbid

suits in addition to cue-bids (leaving only 1NT and

non-jump new suits to deny support!). For the time

being keep jump raises as with no intervention, 4+

support and values, and use the simple cue-bid for

3-card raises and mark for development.

A few examples should make it clear - have a go

at these. In each case, you must respond to your

partner's major opening, after your right-hand

1.2´. The same bid as without the intervention -

there should be no temptation to do anything

else. Indeed, 2´ would be indicated even had 1´

would be little wrong with 3´, except perhaps

with 7½ losers, it is a slight underbid. An eightcard

fit plays much less well and 'raising to the

three-level with three trumps' via bidding the

A 3™ is an artificial bid and should be alerted. If

support and values for the 3-level at least'. Notice

it doesn't promise any particular holding in the