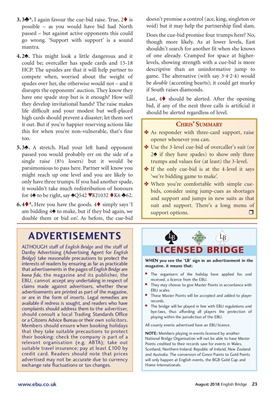 possible - as you would have bid had North

passed - but against active opponents this could

go wrong. 'Support with support' is a sound

could be; overcaller has spade cards and 15-18

HCP. The upsides are that it will help partner to

compete when, worried about the weight of

spades over her, she otherwise would not - and it

disrupts the opponents' auction. They know they

have one spade stop but is it enough? How will

life difficult and your modest but well-placed

high cards should prevent a disaster; let them sort

it out. But if you're happier reserving actions like

this for when you're non-vulnerable, that's fine

5.3´. A stretch. Had your left hand opponent

passed you would probably err on the side of a

single raise (8½ losers) but it would be

parsimonious to pass here. Partner will know you

might reach up one level and you are likely to

only have three trumps. If you had another spade,

it wouldn't take much redistribution of honours

am bidding 4´ to make, but if they bid again, we

double them or bid on'. As before, the cue-bid

opener whenever you can.

D Use the 3-level cue-bid of overcaller's suit (or

2´ if they have spades) to show only three

trumps and values for (at least) the 3-level.

D When you're comfortable with simple cuebids,

and support and jumps in new suits as that

suit and support. There's a long menu of

void) but it may help the partnership find slam.

Does the cue-bid promise four trumps here? No,

though more likely. As at lower levels, East

shouldn't search for another fit when she knows

of one already. Cramped for space at higherlevels,

showing strength with a cue-bid is more

descriptive than an uninformative jump to

be double (accenting hearts); it could get murky

Last, 4t should be alerted. After the opening

bid, if any of the next three calls is artificial it

should be alerted regardless of level.

ALTHOUGH staff of English Bridge and the staff of

interests of readers by ensuring as far as practicable

that advertisements in the pages of English Bridge are

bona fide, the magazine and its publisher, the

EBU, cannot accept any undertaking in respect of

claims made against advertisers, whether these

advertisements are printed as part of the magazine,

or are in the form of inserts. Legal remedies are

available if redress is sought, and readers who have

complaints should address them to the advertiser,

or a Citizens Advice Bureau or their own solicitors.

Members should ensure when booking holidays

that they take suitable precautions to protect

their booking: check the company is part of a

advertised may not be accurate due to currency

magazine, it means that:

• They may choose to give Master Points in accordance with

• These Master Points will be accepted and added to player

• The bridge will be played in line with EBU regulations and

bye-laws, thus affording all players the protection of

National Bridge Organisation will not be able to have Master

Points credited to their records save for events in Wales,

and Australia. The conversion of Green Points to Gold Points

will only happen at English events, the BGB Gold Cup and