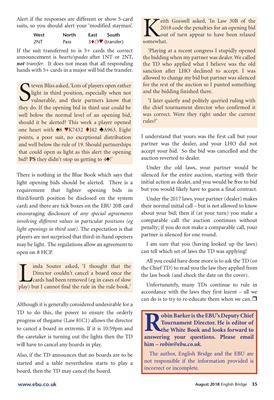 Alert if the responses are different or show 5-card

suits, so you should alert your 'modified stayman'.

If the suit transferred to is 5+ cards the correct

announcement is hearts/spades after 1NT or 2NT,

not transfer. It does not mean that all responding

hands with 5+ cards in a major will bid the transfer.

light in third position, especially when not

vulnerable, and their partners know that

they do. If the opening bid in third seat could be

well below the normal level of an opening bid,

should it be alerted? This week a player opened

and well below the rule of 19. Should partnerships

that could open as light as this alert the opening

inda Souter asked, 'I thought that the

Director couldn't cancel a board once the

cards had been removed (eg in cases of slow

play) but I cannot find the rule in the rule book.' K

eith Goswell asked, 'In Law 30B of the

2018 code the penalties for an opening bid

out of turn appear to have been relaxed

'Playing at a recent congress I stupidly opened

the bidding when my partner was dealer. We called

the TD who applied what I believe was the old

sanction after LHO declined to accept. I was

allowed to change my bid but partner was silenced

for the rest of the auction so I punted something

and the bidding finished there.

'I later quietly and politely queried ruling with

the chief tournament director who confirmed it

was correct. Were they right under the current

There is nothing in the Blue Book which says that

light opening bids should be alerted. There is a

requirement that lighter opening bids in

third/fourth position be disclosed on the system

card; and there are tick boxes on the EBU 20B card

encouraging disclosure of any special agreements

light openings in third seat). The expectation is that

players are not surprised that third-in-hand openers

may be light. The regulations allow an agreement to

Tournament Director. He is editor of

The author, English Bridge and the EBU are

not responsible if the information provided is

I understand that yours was the first call but your

partner was the dealer, and your LHO did not

accept your bid. So the bid was cancelled and the

Under the old laws, your partner would be

silenced for the entire auction, starting with their

initial action as dealer, and you would be free to bid

but you would likely have to guess a final contract.

Under the 2017 laws, your partner (dealer) makes

their normal initial call - but is not allowed to know

about your bid; then if (at your turn) you make a

comparable call the auction continues without

penalty; if you do not make a comparable call, your

partner is silenced for one round.

I am sure that you (having looked up the laws)

can tell which set of laws the TD was applying!

the Chief TD) to read you the law they applied from

the law book (and check the date on the cover).

Unfortunately, many TDs continue to rule in

accordance with the laws they first learnt - all we

can do is to try to re-educate them when we can.r

Although it is generally considered undesirable for a

TD to do this, the power to ensure the orderly

the caretaker is turning out the lights then the TD

will have to cancel any boards in play.

Also, if the TD announces that no boards are to be

started and a table nevertheless starts to play a

board, then the TD may cancel the board.