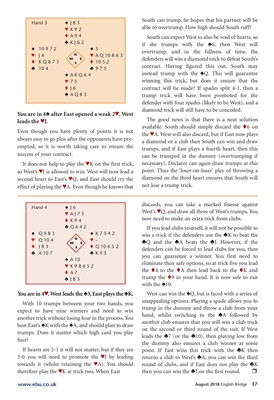 Even though you have plenty of points it is not

always easy to go plus after the opponents have preempted,

so it is worth taking care to ensure the

success of your contract.

It does not help to play the ™K on the first trick,

so West's ™J is allowed to win. West will now lead a

second heart to East's ™Q, and East should try the

effect of playing the ™A. Even though he knows that

South can trump, he hopes that his partner will be

able to overtrump. How high should South ruff?

South can expect West to also be void of hearts, so

if she trumps with the ´6, then West will

overtrump, and in the fullness of time, the

defenders will win a diamond trick to defeat South's

contract. Having figured this out, South may

instead trump with the ´Q. This will guarantee

winning this trick, but does it ensure that the

contract will be made? If spades split 4-1, then a

trump trick will have been promoted for the

defender with four spades (likely to be West), and a

diamond trick will still have to be conceded.

The good news is that there is a neat solution

available. South should simply discard the t6 on

the ™A. West will also discard, but if East now plays

a diamond or a club then South can win and draw

trumps, and if East plays a fourth heart, then this

can be trumped in the dummy (overtrumping if

necessary). Declarer can again draw trumps at this

point. Thus the 'loser-on-loser' play of throwing a

diamond on the third heart ensures that South will

not lose a trump trick.

With 10 trumps between your two hands, you

expect to have nine winners and need to win

another trick without losing four in the process. You

beat East's ´K with the ´A, and should plan to draw

trumps. Does it matter which high card you play

If hearts are 2-1 it will not matter, but if they are

3-0 you will need to promote the ™J by leading

towards it (whilst retaining the ™A). You should

therefore play the ™K at trick two. When East

discards, you can take a marked finesse against

West's ™Q, and draw all three of West's trumps. You

now need to make an extra trick from clubs.

If you lead clubs yourself, it will not be possible to

defenders can be forced to lead clubs for you, then

you can guarantee a winner. You first need to

eliminate their safe options, so at trick five you lead

trump the t9 in your hand. It is now safe to exit

West can win the ´Q, but is faced with a series of

unappealing options. Playing a spade allows you to

trump in the dummy and throw a club from your

hand, whilst switching to the ®A followed by

another club ensures that you will win a club trick

on the second or third round of the suit. If West

the dummy also ensures a club winner at some

point. If East wins this trick with the ®K then

returns a club to West's ®A, you can win the third

round of clubs, and if East does not play the ®K

then you can win the ®J on the first round. r