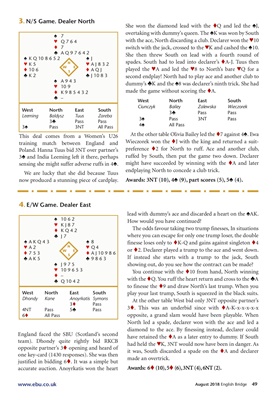 She won the diamond lead with the tQ and led the ´J,

overtaking with dummy's queen. The ´K was won by South

with the ace, North discarding a club. Declarer won the ™10

switch with the jack, crossed to the ™K and cashed the ´10.

She then threw South on lead with a fourth round of

spades. South had to lead into declarer's tA-J. Tuus then

second endplay! North had to play ace and another club to

dummy's ®K and the ´8 was declarer's ninth trick. She had

made the game without scoring the tA.

At the other table Olivia Bailey led the t7 against 4´. Ewa

Wieczorek won the tJ with the king and returned a suitpreference

t2 for North to ruff. Ace and another club,

ruffed by South, then put the game two down. Declarer

might have succeeded by winning with the tA and later

This deal comes from a Women's U26

training match between England and

3´ and India Leeming left it there, perhaps

We are lucky that she did because Tuus

lead with dummy's ace and discarded a heart on the ´AK.

How would you have continued?

where you can escape for only one trump loser, the double

finesse loses only to tK-Q and gains against singleton t4

or t2. Declarer played a trump to the ace and went down.

If instead she starts with a trump to the jack, South

showing out, do you see how the contract can be made?

You continue with the t10 from hand, North winning

with the tQ. You ruff the heart return and cross to the ®A

to finesse the t9 and draw North's last trump. When you

play your last trump, South is squeezed in the black suits.

At the other table West bid only 3NT opposite partner's

3t. This was an underbid since with tA-K-x-x-x-x-x

opposite, a grand slam would have been playable. When

North led a spade, declarer won with the ace and led a

diamond to the ace. By finessing instead, declarer could

have retained the tA as a later entry to dummy. If South

had held the ™K, 3NT would now have been in danger. As

it was, South discarded a spade on the tA and declarer

opposite partner's 3t opening and heard of

justified in bidding 6t. It was a simple but