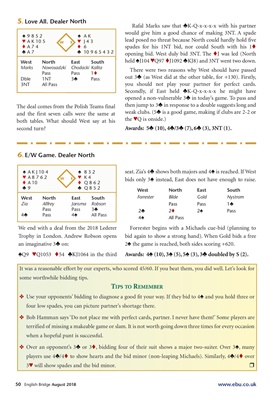 would give him a good chance of making 3NT. A spade

lead posed no threat because North could hardly hold five

spades for his 1NT bid, nor could South with his 1t

There were two reasons why West should have passed

you should not play your partner for perfect cards.

opened a non-vulnerable 3® in today's game. To pass and

The deal comes from the Polish Teams final

and the first seven calls were the same at

both tables. What should West say at his

We end with a deal from the 2018 Lederer

bids only 3´ instead, East does not have enough to raise.

Forrester begins with a Michaels cue-bid (planning to

bid again to show a strong hand). When Gold bids a free

It was a reasonable effort by our experts, who scored 45/60. If you beat them, you did well. Let's look for

D Use your opponents' bidding to diagnose a good fit your way. If they bid to 4´ and you hold three or

four low spades, you can picture partner's shortage there.

D Bob Hamman says 'Do not place me with perfect cards, partner. I never have them!' Some players are

terrified of missing a makeable game or slam. It is not worth going down three times for every occasion

when a hopeful punt is successful.

D Over an opponent's 3® or 3t, bidding four of their suit shows a major two-suiter. Over 3´, many

players use 4®/4t to show hearts and the bid minor (non-leaping Michaels). Similarly, 4®/4t over

3™ will show spades and the bid minor. r