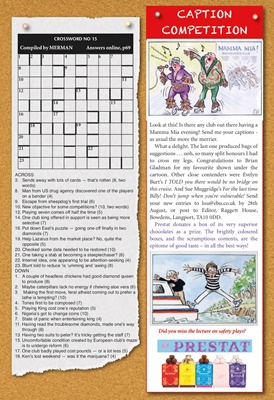 8. Man from US drug agency discovered one of the players

14. One club king offered in support is seen as being more

16. Put down East's puzzle - going one off finally in two

19. Help Lazarus from the market place? No, quite the

21. One taking a stab at becoming a steeplechaser? (6)

22. Internet idea, one appearing to be attention-seeking (4)

1. A couple of headless chickens had good diamond queen

3 Making the first move, feral atheist coming out to prefer a

7. State of panic when entertaining king (4)

11. Having read the troublesome diamonds, made one's way

13 Having two suits to peter? It's tricky getting the staff (7)

is to undergo reform (6)

Look at this! Is there any club out there having a

Mamma Mia evening? Send me your captions as

usual the more the merrier.

What a delight. The last one produced bags of

suggestions . . . ooh, so many split honours I had

to cross my legs. Congratulations to Brian

Gladman for my favourite shown under the

cartoon. Other close contenders were Evelyn

Burt's I TOLD you there would be no bridge on

this cruise. And Sue Muggridge's For the last time

your new entries to lou@ebu.co.uk by 28th

Prestat donates a box of its very superior

chocolates as a prize. The brightly coloured

boxes, and the scrumptious contents, are the

epitome of good taste - in all the best ways!

Did you miss the lecture on safety plays?