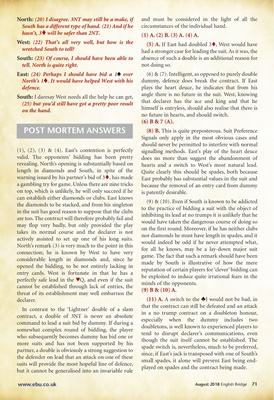 South has a different type of hand. (21) And if he

tell. North is quite right.

North's 1t. It would have helped West with his

South: I daresay West needs all the help he can get,

(25) but you'd still have got a pretty poor result

valid. The opponents' bidding has been pretty

revealing. North's opening is substantially based on

length in diamonds and South, in spite of the

warning issued by his partner's bid of 3t, has made

a gambling try for game. Unless there are nine tricks

on top, which is unlikely, he will only succeed if he

can establish either diamonds or clubs. East knows

the diamonds to be stacked, and from his singleton

in the suit has good reason to suppose that the clubs

are too. The contract will therefore probably fail and

may flop very badly, but only provided the play

takes its normal course and the declarer is not

actively assisted to set up one of his long suits.

North's remark (3) is very much to the point in this

connection; he is known by West to have very

considerable length in diamonds and, since he

opened the bidding, to be not entirely lacking in

entry cards. West is fortunate in that he has a

perfectly safe lead in the ™Q, and even if the suit

cannot be established through lack of entries, the

threat of its establishment may well embarrass the

In contrast to the 'Lightner' double of a slam

contract, a double of 3NT is never an absolute

command to lead a suit bid by dummy. If during a

somewhat complex round of bidding, the player

who subsequently becomes dummy has bid one or

more suits and has not been supported by his

partner, a double is obviously a strong suggestion to

the defender on lead that an attack on one of these

suits will provide the most hopeful line of defence,

but it cannot be generalised into an invariable rule

and must be considered in the light of all the

circumstances of the individual hand.

had a stronger case for leading the suit. As it was, the

absence of such a double is an additional reason for

dummy, defence does break the contract. If East

plays the heart deuce, he indicates that from his

angle there is no future in the suit. West, knowing

that declarer has the ace and king and that he

himself is entryless, should also realise that there is

no future in hearts, and should switch.

(8) B. This is quite preposterous. Suit Preference

Signals only apply in the most obvious cases and

should never be permitted to interfere with normal

does no more than suggest the abandonment of

hearts and a switch to West's most natural lead.

Quite clearly this should be spades, both because

East probably has substantial values in the suit and

because the removal of an entry card from dummy

to the practice of bidding a suit with the object of

inhibiting its lead at no trumps it is unlikely that he

would have taken the dangerous course of doing so

on the first round. Moreover, if he has neither clubs

nor diamonds he must have length in spades, and it

would indeed be odd if he never attempted what,

for all he knows, may be a lay-down major suit

game. The fact that such a remark should have been

made by South is illustrative of how the mere

reputation of certain players for 'clever' bidding can

be exploited to induce quite irrational fears in the

minds of the opponents.

that the contract can still be defeated and an attack

in a no trump contract on a doubleton honour,

especially when the dummy includes two

doubletons, is well known to experienced players to

tend to disrupt declarer's communications, even

though the suit itself cannot be established. The

spade switch is, nevertheless, much to be preferred,

since, if East's jack is transposed with one of South's

small spades, it alone will prevent East being endplayed

on spades and the contract being made. 71