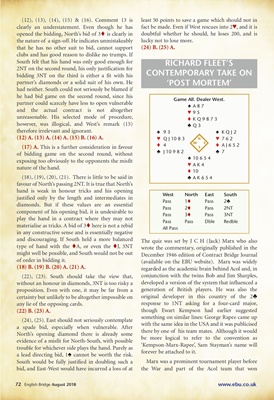 clearly an understatement. Even though he has

opened the bidding, North's bid of 3t is clearly in

the nature of a sign-off. He indicates unmistakeably

that he has no other suit to bid, cannot support

clubs and has good reason to dislike no trumps. If

South felt that his hand was only good enough for

2NT on the second round, his only justification for

bidding 3NT on the third is either a fit with his

partner's diamonds or a solid suit of his own. He

had neither. South could not seriously be blamed if

he had bid game on the second round, since his

partner could scarcely have less to open vulnerable

and the actual contract is not altogether

unreasonable. His selected mode of procedure,

however, was illogical, and West's remark (15)

(17) A. This is a further consideration in favour

of bidding game on the second round, without

exposing too obviously to the opponents the misfit

nature of the hand.

favour of North's passing 2NT. It is true that North's

hand is weak in honour tricks and his opening

justified only by the length and intermediates in

diamonds. But if these values are an essential

component of his opening bid, it is undesirable to

play the hand in a contract where they may not

materialise as tricks. A bid of 3t here is not a rebid

in any constructive sense and is essentially negative

and discouraging. If South held a more balanced

type of hand with the tA, or even the tJ, 3NT

might well be possible, and South would not be out

of order in bidding it.

without an honour in diamonds, 3NT is too risky a

proposition. Even with one, it may be far from a

certainty but unlikely to be altogether impossible on

any lie of the opposing cards.

a spade bid, especially when vulnerable. After

North's opening diamond there is already some

evidence of a misfit for North-South, with possible

trouble for whichever side plays the hand. Purely as

a lead directing bid, 1´ cannot be worth the risk.

South would be fully justified in doubling such a

bid, and East-West would have incurred a loss of at

least 50 points to save a game which should not in

fact be made. Even if West rescues into 2™, and it is

doubtful whether he should, he loses 200, and is

lucky not to lose more.

wrote the commentary, originally published in the

regarded as the academic brain behind Acol and, in

conjunction with the twins Bob and Jim Sharples,

developed a version of the system that influenced a

generation of British players. He was also the

original developer in this country of the 2®

response to 1NT asking for a four-card major,

though Ewart Kempson had earlier suggested

something on similar lines: George Rapee came up

with the same idea in the USA and it was publicised

there by one of his team mates. Although it would

be more logical to refer to the convention as

forever be attached to it.

Marx was a prominent tournament player before

the War and part of the Acol team that won