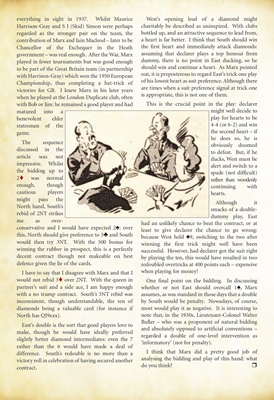 everything in sight in 1937. Whilst Maurice

regarded as the stronger pair on the team, the

contribution of Marx and Iain Macleod - later to be

Chancellor of the Exchequer in the Heath

government - was real enough. After the War, Marx

played in fewer tournaments but was good enough

to be part of the Great Britain team (in partnership

with Harrison-Gray) which won the 1950 European

Championship, thus completing a hat-trick of

victories for GB. I knew Marx in his later years

when he played at the London Duplicate club, often

with Bob or Jim: he remained a good player and had

the bidding up to

and I would have expected 2´: over

this, North should give preference to 3® and South

winning the rubber in prospect, this is a perfectly

decent contract though not makeable on best

defence given the lie of the cards.

would not rebid 3t over 2NT. With the queen in

partner's suit and a side ace, I am happy enough

with a no trump contract. South's 3NT rebid was

inconsistent, though understandable, the ten of

diamonds being a valuable card (for instance if

East's double is the sort that good players love to

make, though he would have ideally preferred

slightly better diamond intermediates: even the 7

rather than the 6 would have made a deal of

difference. South's redouble is no more than a

victory roll in celebration of having secured another

charitably be described as uninspired. With clubs

bottled up, and an attractive sequence to lead from,

a heart is far better. I think that South should win

assuming that declarer plays a top honour from

dummy, there is no point in East ducking, so he

should win and continue a heart. As Marx pointed

out, it is preposterous to regard East's trick one play

of his lowest heart as suit preference. Although there

are times when a suit preference signal at trick one

is appropriate, this is not one of them.

This is the crucial point in the play: declarer

play for hearts to be

the second heart - if

he does so, he is

to defeat. But, if he

ducks, West must be

alert and switch to a

had an unlikely chance to beat the contract, or at

least to give declarer the chance to go wrong:

because West held ´9, switching to the two after

successful. However, had declarer got the suit right

by playing the ten, this would have resulted in two

redoubled overtricks at 400 points each - expensive

when playing for money!

One final point on the bidding. In discussing

whether or not East should overcall 1´, Marx

assumes, as was standard in those days that a double

by South would be penalty. Nowadays, of course,

most would play it as negative. It is interesting to

note that, in the 1930s, Lieutenant-Colonel Walter

Buller - who was a proponent of natural bidding

and absolutely opposed to artificial conventions -

regarded a double of one-level intervention as

'informatory' (not for penalty).

I think that Marx did a pretty good job of

analysing the bidding and play of this hand: what

do you think? r