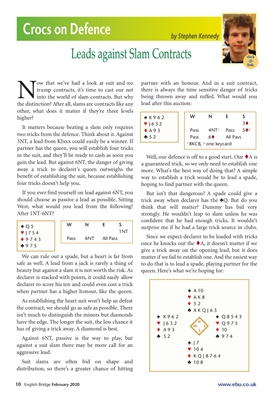 ow that we've had a look at suit and no

trump contracts, it's time to cast our net

into the world of slam contracts. But why

the distinction? After all, slams are contracts like any

other, what does it matter if they're three levels

It matters because beating a slam only requires

two tricks from the defence. Think about it. Against

3NT, a lead from KJxxx could easily be a winner. If

partner has the queen, you will establish four tricks

in the suit, and they'll be ready to cash as soon you

gain the lead. But against 6NT, the danger of giving

away a trick to declarer's queen outweighs the

If you ever find yourself on lead against 6NT, you

should choose as passive a lead as possible. Sitting

West, what would you lead from the following?

We can rule out a spade, but a heart is far from

safe as well. A lead from a jack is rarely a thing of

beauty but against a slam it is not worth the risk. As

declarer is stacked with points, it could easily allow

declarer to score his ten and could even cost a trick

when partner has a higher honour, like the queen.

As establishing the heart suit won't help us defeat

the contract, we should go as safe as possible. There

isn't much to distinguish the minors but diamonds

have the edge. The longer the suit, the less chance it

has of giving a trick away. A diamond is best.

Against 6NT, passive is the way to play, but

against a suit slam there may be more call for an

Suit slams are often bid on shape and

distribution, so there's a greater chance of hitting

partner with an honour. And in a suit contract,

there is always the time sensitive danger of tricks

being thrown away and ruffed. What would you

lead after this auction:

Well, our defence is off to a good start. Our tA is

a guaranteed trick, so we only need to establish one

more. What's the best way of doing that? A simple

way to establish a trick would be to lead a spade,

hoping to find partner with the queen.

But isn't that dangerous? A spade could give a

trick away when declarer has the ´Q. But do you

think that will matter? Dummy has bid very

strongly. He wouldn't leap to slam unless he was

confident that he had enough tricks. It wouldn't

surprise me if he had a large trick source in clubs.

Since we expect declarer to be loaded with tricks

once he knocks out the tA, it doesn't matter if we

give a trick away on the opening lead, but it does

matter if we fail to establish one. And the easiest way

to do that is to lead a spade, playing partner for the

queen. Here's what we're hoping for: