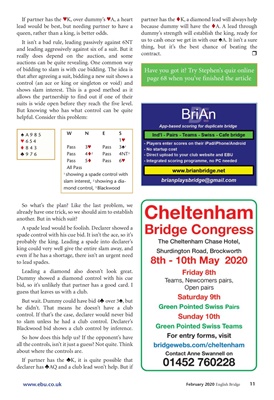 1 showing a spade control with

If partner has the ™K, over dummy's ™A, a heart

lead would be best, but needing partner to have a

queen, rather than a king, is better odds.

It isn't a bad rule, leading passively against 6NT

and leading aggressively against six of a suit. But it

really does depend on the auction, and some

auctions can be quite revealing. One common way

of bidding to slam is with cue bidding. The idea is

that after agreeing a suit, bidding a new suit shows a

control (an ace or king or singleton or void) and

shows slam interest. This is a good method as it

allows the partnership to find out if one of their

suits is wide open before they reach the five level.

But knowing who has what control can be quite

So what's the plan? Like the last problem, we

already have one trick, so we should aim to establish

another. But in which suit?

A spade lead would be foolish. Declarer showed a

spade control with his cue bid. It isn't the ace, so it's

probably the king. Leading a spade into declarer's

king could very well give the entire slam away, and

even if he has a shortage, there isn't an urgent need

Dummy showed a diamond control with his cue

bid, so it's unlikely that partner has a good card. I

guess that leaves us with a club.

he didn't. That means he doesn't have a club

control. If that's the case, declarer would never bid

to slam unless he had a club control. Declarer's

So how does this help us? If the opponent's have

all the controls, isn't it just a guess? Not quite. Think

about where the controls are.

If partner has the ®K, it is quite possible that

declarer has ®AQ and a club lead won't help. But if

partner has the tK, a diamond lead will always help

because dummy will have the tA. A lead through

dummy's strength will establish the king, ready for

us to cash once we get in with our ´A. It isn't a sure

thing, but it's the best chance of beating the

Have you got it? Try Stephen's quiz online

page 68 when you've finished the article