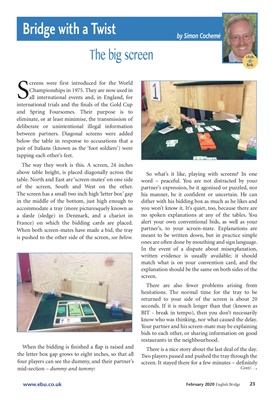 creens were first introduced for the World

Championships in 1975. They are now used in

all international events and, in England, for

international trials and the finals of the Gold Cup

and Spring Foursomes. Their purpose is to

eliminate, or at least minimise, the transmission of

between partners. Diagonal screens were added

below the table in response to accusations that a

pair of Italians (known as the 'foot soldiers') were

The way they work is this. A screen, 24 inches

above table height, is placed diagonally across the

table. North and East are 'screen-mates' on one side

of the screen, South and West on the other.

in the middle of the bottom, just high enough to

a slæde (sledge) in Denmark, and a chariot in

France) on which the bidding cards are placed.

When both screen-mates have made a bid, the tray

is pushed to the other side of the screen, see below.

When the bidding is finished a flap is raised and

the letter box gap grows to eight inches, so that all

four players can see the dummy, and their partner's

So what's it like, playing with screens? In one

word - peaceful. You are not distracted by your

partner's expression, be it agonised or puzzled, nor

his manner, be it confident or uncertain. He can

dither with his bidding box as much as he likes and

you won't know it. It's quiet, too, because there are

no spoken explanations at any of the tables. You

alert your own conventional bids, as well as your

partner's, to your screen-mate. Explanations are

meant to be written down, but in practice simple

ones are often done by mouthing and sign language.

In the event of a dispute about misexplanation,

written evidence is usually available; it should

match what is on your convention card, and the

explanation should be the same on both sides of the

There are also fewer problems arising from

hesitations. The normal time for the tray to be

returned to your side of the screen is about 20

seconds. If it is much longer than that (known as

BIT - break in tempo), then you don't necessarily

know who was thinking, nor what caused the delay.

Your partner and his screen-mate may be explaining

bids to each other, or sharing information on good

restaurants in the neighbourhood.

There is a nice story about the last deal of the day.

Two players passed and pushed the tray through the

screen. It stayed there for a few minutes - definitely