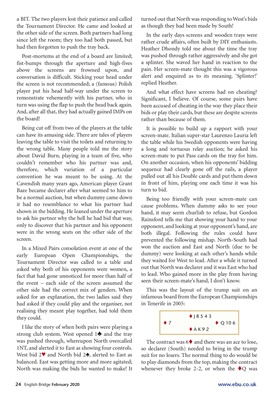 a BIT. The two players lost their patience and called

the Tournament Director. He came and looked at

the other side of the screen. Both partners had long

since left the room; they too had both passed, but

had then forgotten to push the tray back.

Post-mortems at the end of a board are limited;

fist-bumps through the aperture and high-fives

above the screens are frowned upon, and

conversation is difficult. Sticking your head under

the screen is not recommended; a (famous) Polish

player put his head half-way under the screen to

remonstrate vehemently with his partner, who in

turn was using the flap to push the head back again.

And, after all that, they had actually gained IMPs on

Being cut off from two of the players at the table

can have its amusing side. There are tales of players

leaving the table to visit the toilets and returning to

the wrong table. Many people told me the story

about David Burn, playing in a team of five, who

couldn't remember who his partner was and,

therefore, which variation of a particular

convention he was meant to be using. At the

Baze became declarer after what seemed to him to

be a normal auction, but when dummy came down

it had no resemblance to what his partner had

shown in the bidding. He leaned under the aperture

to ask his partner why the hell he had bid that way,

only to discover that his partner and his opponent

were in the wrong seats on the other side of the

In a Mixed Pairs consolation event at one of the

Tournament Director was called to a table and

asked why both of his opponents were women, a

fact that had gone unnoticed for more than half of

the event - each side of the screen assumed the

other side had the correct mix of genders. When

asked for an explanation, the two ladies said they

had asked if they could play and the organiser, not

realising they meant play together, had told them

I like the story of when both pairs were playing a

was pushed through, whereupon North overcalled

1NT, and alerted it to East as showing four controls.

balanced. East was getting more and more agitated;

North was making the bids he wanted to make! It

turned out that North was responding to West's bids

as though they had been made by South!

In the early days screens and wooden trays were

Heather Dhondy told me about the time the tray

was pushed through rather aggressively and she got

a splinter. She waved her hand in reaction to the

pain. Her screen-mate thought this was a vigorous

alert and enquired as to its meaning. 'Splinter!'

And what effect have screens had on cheating?

Significant, I believe. Of course, some pairs have

been accused of cheating in the way they place their

bids or play their cards, but these are despite screens

rather than because of them.

It is possible to build up a rapport with your

the table while his Swedish opponents were having

a long and tortuous relay auction; he asked his

screen-mate to put Pass cards on the tray for him.

On another occasion, when his opponents' bidding

sequence had clearly gone off the rails, a player

pulled out all his Double cards and put them down

in front of him, playing one each time it was his

Being too friendly with your screen-mate can

cause problems. When dummy asks to see your

hand, it may seem churlish to refuse, but Gordon

Rainsford tells me that showing your hand to your

opponent, and looking at your opponent's hand, are

both illegal. Following the rules could have

prevented the following mishap. North-South had

won the auction and East and North (due to be

dummy) were looking at each other's hands while

they waited for West to lead. After a while it turned

out that North was declarer and it was East who had

to lead. Who gained more in the play from having

This was the layout of the trump suit on an

infamous board from the European Championships

The contract was 6t and there was an ace to lose,

so declarer (South) needed to bring in the trump

suit for no losers. The normal thing to do would be

to play diamonds from the top, making the contract

whenever they broke 2-2, or when the tQ was