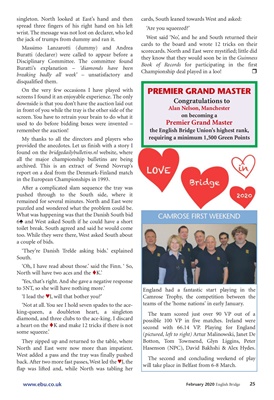 England had a fantastic start playing in the

Camrose Trophy, the competition between the

teams of the 'home nations' in early January.

The team scored just over 90 VP out of a

second with 66.14 VP. Playing for England

The second and concluding weekend of play

will take place in Belfast from 6-8 March.

singleton. North looked at East's hand and then

spread three fingers of his right hand on his left

wrist. The message was not lost on declarer, who led

the jack of trumps from dummy and ran it.

Buratti (declarer) were called to appear before a

Buratti's explanation - 'diamonds have been

breaking badly all week' - unsatisfactory and

On the very few occasions I have played with

screens I found it an enjoyable experience. The only

downside is that you don't have the auction laid out

screen. You have to retrain your brain to do what it

used to do before bidding boxes were invented -

My thanks to all the directors and players who

provided the anecdotes. Let us finish with a story I

all the major championship bulletins are being

archived. This is an extract of Svend Novrup's

report on a deal from the Denmark-Finland match

in the European Championships in 1993.

After a complicated slam sequence the tray was

pushed through to the South side, where it

remained for several minutes. North and East were

puzzled and wondered what the problem could be.

What was happening was that the Danish South bid

6´ and West asked South if he could have a short

toilet break. South agreed and said he would come

too. While they were there, West asked South about

a couple of bids.

North will have two aces and the tK.'

'Yes, that's right. And she gave a negative response

to 5NT, so she will have nothing more.'

'Not at all. You see I hold seven spades to the aceking-queen,

a doubleton heart, a singleton

diamond, and three clubs to the ace-king. I discard

They zipped up and returned to the table, where

North and East were now more than impatient.

West added a pass and the tray was finally pushed

back. After two more fast passes, West led the ™J, the

flap was lifted and, while North was tabling her

West said 'No', and he and South returned their

cards to the board and wrote 12 tricks on their

scorecards. North and East were mystified; little did

they know that they would soon be in the Guinness

Book of Records for participating in the first