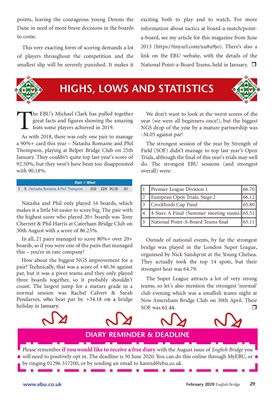 Dane in need of more brave decisions in the boards

This very exacting form of scoring demands a lot

of players throughout the competition and the

smallest slip will be severely punished. It makes it exciting both to play and to watch. For more

information about tactics at board-a-match/pointa-board,

see my article for this magazine from June

link on the EBU website, with the details of the

he EBU's Michael Clark has pulled together

feats some players achieved in 2019.

As with 2018, there was only one pair to manage

a 90%+ card this year - Natasha Romaine and Phil

January. They couldn't quite top last year's score of

Outside of national events, by far the strongest

bridge was played in the London Super League,

organised by Nick Sandqvist at the Young Chelsea.

They actually took the top 14 spots, but their

The Super League attracts a lot of very strong

club evening which was a smallish teams night at

Natasha and Phil only played 16 boards, which

makes it a little bit easier to score big. The pair with

the highest score who played 20+ boards was Tony

boards, so if you were one of the pairs that managed

this - you're in rare company!

How about the biggest NGS improvement for a

par, but it was a pivot teams and they only played

three boards together, so it probably shouldn't

count. The largest jump for a mature grade in a

We don't want to look at the worst scores of the

year (we were all beginners once!), but the biggest

NGS drop of the year by a mature partnership was

The strongest session of the year by Strength of

Trials, although the final of this year's trials may well

do. The strongest EBU sessions (and strongest

Please remember if you would like to receive a free diary with the August issue of English Bridkarend@ebu.co.ukl need to positively opt in. The deadline is 30 June 2020. You can do this online through MyEBU, or