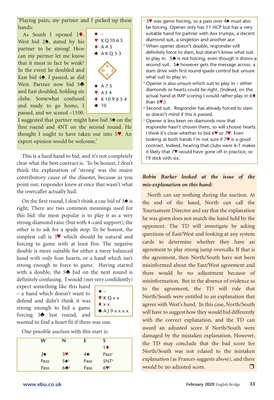 be forcing. Opener only has 11 HCP but has a very

suitable hand for partner with Axx trumps, a decent

diamond suit, a singleton and another ace

2 When opener doesn't double, responder will

definitely force to slam, but doesn't know what suit

to play in. 5® is not forcing, even though it shows a

second suit. 5´ however gets the message across: a

slam drive with first round spade control but unsure

what suit to play in.

3 Opener is also unsure which suit to play in - either

diamonds or hearts could be right. (Indeed, on the

actual hand at IMP scoring I would rather play in 6t

so doesn't mind if this is passed.

5 Opener is less keen on diamonds now that

responder hasn't chosen them, so will choose hearts.

it likely that 7™ would have gone off in practice, so

'Playing pairs, my partner and I picked up these

As South I opened 1t.

partner to be strong! How

can my partner let me know

that it must in fact be weak?

In the event he doubled and

and ready to go home, I

I suggested that partner might have bid 3´ on the

first round and 4NT on the second round. He

thought I ought to have taken out into 5™. An

expert opinion would be welcome.'

This is a hard hand to bid, and it's not completely

clear what the best contract is. To be honest, I don't

think the explanation of 'strong' was the major

contributory cause of the disaster, because as you

point out, responder knew at once that wasn't what

the overcaller actually had.

right. There are two common meanings used for

this bid: the most popular is to play it as a very

strong diamond raise (but with 4-card support); the

other is to ask for a spade stop. To be honest, the

simplest call is 3™ which should be natural and

forcing to game with at least five. The negative

double is more suitable for either a more balanced

hand with only four hearts, or a hand which isn't

strong enough to force to game. Having started

with a double, the 5® bid on the next round is

definitely confusing. I would (not very confidently)

- a hand which doesn't want to

defend and didn't think it was

strong enough to bid a game

forcing 3® last round, and

wanted to find a heart fit if there was one.

One possible auction with this start is:

Robin Barker looked at the issue of the

North can say nothing during the auction. At

the end of the hand, North can call the

Tournament Director and say that the explanation

he was given does not match the hand held by the

opponent. The TD will investigate by asking

questions of East/West and looking at any system

cards to determine whether they have an

agreement to play strong jump overcalls. If that is

the agreement, then North/South have not been

misinformed about the East/West agreement and

there would be no adjustment because of

misinformation. But in the absence of evidence as

to the agreement, the TD will rule that

North/South were entitled to an explanation that

agrees with West's hand. In this case, North/South

will have to suggest how they would bid differently

with the correct explanation, and the TD can

award an adjusted score if North/South were

damaged by the mistaken explanation. However,

the TD may conclude that the bad score for

North/South was not related to the mistaken

explanation (as Frances suggests above), and there

would be no adjusted score. r