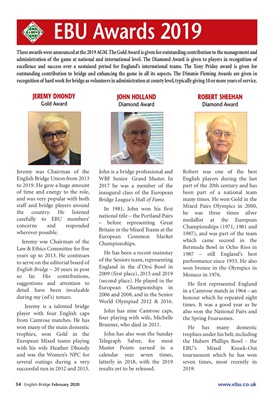 These awards were announced at the 2019 AGM. The Gold Award is given for outstanding contribution to the management and

administration of the game at national and international level. The Diamond Award is given to players in recognition of

excellence and success over a sustained period for England's international teams. The Tony Priday award is given for

outstanding contribution to bridge and enhancing the game in all its aspects. The Dimmie Fleming Awards are given in

recognition of hard work for bridge as volunteers in administration at county level, typically giving 10 or more years of service.

John is a bridge professional and

inaugural class of the European

Britain in the Mixed Teams at the

He has been a recent mainstay

of the Seniors team, representing

England in the d'Orsi Bowl in

(second place). He played in the

John has also won the Sunday

Telegraph Salver, for most

Master Points earned in a

results yet to be released.

Jeremy was Chairman of the

of time and energy to the role,

and was very popular with both

staff and bridge players around

the country. He listened

Jeremy was Chairman of the

to serve on the editorial board of

so far. His contributions,

suggestions and attention to

detail have been invaluable

during my (ed's) tenure.

Jeremy is a talented bridge

from Camrose matches. He has

won many of the main domestic

trophies, won Gold in the

with his wife Heather Dhondy

and was the Women's NPC for

several outings during a very

Robert was one of the best

English players during the last

part of the 20th century and has

been part of a national team

many times. He won Gold in the

he was three times silver

medallist at the European

which came second in the

Bermuda Bowl in Ocho Rios in

performance since 1955. He also

won bronze in the Olympics in

honour which he repeated eight

times. It was a good year as he

also won the National Pairs and

He has many domestic

trophies under his belt, including

the Hubert Phillips Bowl - the

tournament which he has won

seven times, most recently in