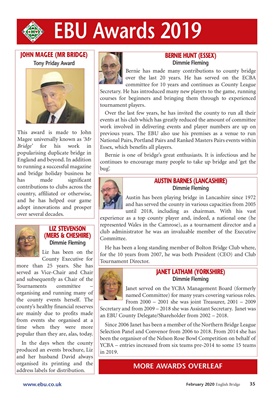 Austin has been playing bridge in Lancashire since 1972

and has served the county in various capacities from 2005

until 2018, including as chairman. With his vast

experience as a top county player and, indeed, a national one (he

represented Wales in the Camrose), as a tournament director and a

club administrator he was an invaluable member of the Executive

He has been a long standing member of Bolton Bridge Club where,

This award is made to John

Bridge' for his work in

England and beyond. In addition

to running a successful magazine

and bridge holiday business he

contributions to clubs across the

and he has helped our game

Bernie has made many contributions to county bridge

over the last 20 years. He has served on the ECBA

committee for 10 years and continues as County League

Secretary. He has introduced many new players to the game, running

courses for beginners and bringing them through to experienced

Over the last few years, he has invited the county to run all their

work involved in delivering events and player numbers are up on

previous years. The EBU also use his premises as a venue to run

Essex, which benefits all players.

Bernie is one of bridge's great enthusiasts. It is infectious and he

Liz has been on the

more than 25 years. She has

served as Vice-Chair and Chair

and subsequently as Chair of the

organising and running many of

the county events herself. The

are mainly due to profits made

from events she organised at a

time when they were more

popular than they are, alas, today.

In the days when the county

and her husband David always

organised its printing and the

Janet served on the YCBA Management Board (formerly