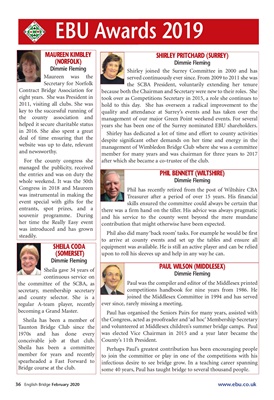 Phil has recently retired from the post of Wiltshire CBA

Treasurer after a period of over 15 years. His financial

skills ensured the committee could always be certain that

there was a firm hand on the tiller. His advice was always pragmatic

and his service to the county went beyond the mere mundane

Phil also did many 'back room' tasks. For example he would be first

equipment was available. He is still an active player and can be relied

upon to roll his sleeves up and help in any way he can.

eight years. She was President in

key to the successful running of

the county association and

deal of time ensuring that the

For the county congress she

the entries and was on duty the

whole weekend. It was the 50th

Congress in 2018 and Maureen

was instrumental in making the

event special with gifts for the

entrants, spot prizes, and a

her time the Really Easy event

was introduced and has grown

Shirley joined the Surrey Committee in 2000 and has

because both the Chairman and Secretary were new to their roles. She

took over as Competitions Secretary in 2015, a role she continues to

hold to this day. She has overseen a radical improvement to the

quality and attendance at Surrey's events and has taken over the

management of our major Green Point weekend events. For several

years she has been one of the Surrey nominated EBU shareholders.

despite significant other demands on her time and energy in the

management of Wimbledon Bridge Club where she was a committee

after which she became a co-trustee of the club.

the committee of the SCBA, as

and county selector. She is a

Sheila has been a member of

Taunton Bridge Club since the

conceivable job at that club.

Sheila has been a committee

member for years and recently

spearheaded a Fast Forward to

Bridge course at the club.

Paul was the compiler and editor of the Middlesex printed

competitions handbook for nine years from 1986. He

joined the Middlesex Committee in 1994 and has served

ever since, rarely missing a meeting.

Paul has organised the Seniors Pairs for many years, assisted with

the Congress, acted as proofreader and 'ad hoc' Membership Secretary

some 40 years, Paul has taught bridge to several thousand people.