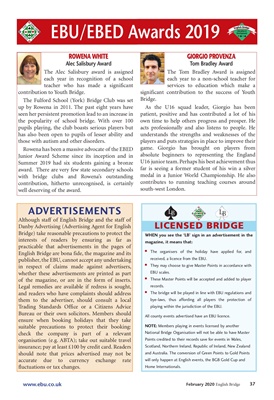 The Alec Salisbury award is assigned

each year in recognition of a school

teacher who has made a significant

up by Rowena in 2011. The past eight years have

seen her persistent promotion lead to an increase in

the popularity of school bridge. With over 100

has also been open to pupils of lesser ability and

those with autism and other disorders.

Rowena has been a massive advocate of the EBED

Junior Award Scheme since its inception and in

with bridge clubs and Rowena's outstanding

well deserving of the award.

The Tom Bradley Award is assigned

each year to a non-school teacher for

services to education which make a

significant contribution to the success of Youth

As the U16 squad leader, Giorgio has been

patient, positive and has contributed a lot of his

own time to help others progress and prosper. He

acts professionally and also listens to people. He

understands the strengths and weaknesses of the

players and puts strategies in place to improve their

game. Giorgio has brought on players from

absolute beginners to representing the England

far is seeing a former student of his win a silver

medal in a Junior World Championship. He also

contributes to running teaching courses around

Although staff of English Bridge and the staff of

interests of readers by ensuring as far as

practicable that advertisements in the pages of

English Bridge are bona fide, the magazine and its

in respect of claims made against advertisers,

whether these advertisements are printed as part

of the magazine, or are in the form of inserts.

Legal remedies are available if redress is sought,

and readers who have complaints should address

them to the advertiser, should consult a local

Bureau or their own solicitors. Members should

ensure when booking holidays that they take

suitable precautions to protect their booking:

check the company is part of a relevant

should note that prices advertised may not be

accurate due to currency exchange rate

magazine, it means that:

• They may choose to give Master Points in accordance with

• These Master Points will be accepted and added to player

• The bridge will be played in line with EBU regulations and

bye-laws, thus affording all players the protection of

National Bridge Organisation will not be able to have Master

Points credited to their records save for events in Wales,

and Australia. The conversion of Green Points to Gold Points

will only happen at English events, the BGB Gold Cup and