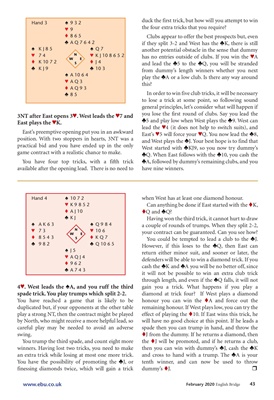 East's preemptive opening put you in an awkward

position. With two stoppers in hearts, 3NT was a

practical bid and you have ended up in the only

game contract with a realistic chance to make.

You have four top tricks, with a fifth trick

available after the opening lead. There is no need to

duck the first trick, but how will you attempt to win

the four extra tricks that you require?

Clubs appear to offer the best prospects but, even

another potential obstacle in the sense that dummy

has no entries outside of clubs. If you win the ™A

and lead the ®5 to the ®Q, you will be stranded

from dummy's length winners whether you next

play the ®A or a low club. Is there any way around

In order to win five club tricks, it will be necessary

to lose a trick at some point, so following sound

general principles, let's consider what will happen if

you lose the first round of clubs. Say you lead the

lead the ™4 (it does not help to switch suits), and

and West plays the ®J. Your best hope is to find that

West started with ®KJ9, so you now try dummy's

®A, followed by dummy's remaining clubs, and you

You have reached a game that is likely to be

duplicated but, if your opponents at the other table

play a strong NT, then the contract might be played

by North, who might receive a more helpful lead, so

careful play may be needed to avoid an adverse

You trump the third spade, and count eight more

winners. Having lost two tricks, you need to make

an extra trick while losing at most one more trick.

You have the possibility of promoting the ®J, or

finessing diamonds twice, which will gain a trick

when West has at least one diamond honour.

Can anything be done if East started with the tK,

Having won the third trick, it cannot hurt to draw

a couple of rounds of trumps. When they split 2-2,

your contract can be guaranteed. Can you see how?

You could be tempted to lead a club to the ®J.

However, if this loses to the ®Q, then East can

return either minor suit, and sooner or later, the

defenders will be able to win a diamond trick. If you

cash the ®K and ®A you will be no better off, since

it will not be possible to win an extra club trick

through length, and even if the ®Q falls, it will not

gain you a trick. What happens if you play a

diamond at trick four? If West plays a diamond

honour you can win the tA and force out the

remaining honour. If West plays low, you can try the

effect of playing the t10. If East wins this trick, he

will have no good choice at this point. If he leads a

spade then you can trump in hand, and throw the

tJ from the dummy. If he returns a diamond, then

the tJ will be promoted, and if he returns a club,

then you can win with dummy's ®J, cash the ®K

and cross to hand with a trump. The ®A is your

tenth winner, and can now be used to throw