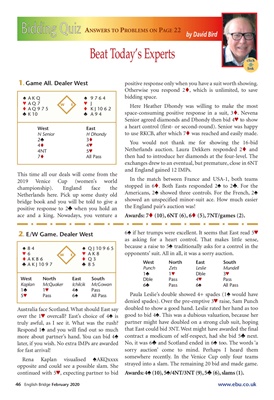 positive response only when you have a suit worth showing.

Otherwise you respond 2t, which is unlimited, to save

Here Heather Dhondy was willing to make the most

Senior agreed diamonds and Dhondy then bid 4™ to show

a heart control (first- or second-round). Senior was happy

to use RKCB, after which 7t was reached and easily made.

You would not thank me for showing the 16-bid

then had to introduce her diamonds at the four-level. The

exchanges drew to an eventual, but premature, close in 6NT

In the match between France and USA-1, both teams

showed an unspecified minor-suit ace. How much easier

the England pair's auction was!

2. E/W Game. Dealer West 6´ if her trumps were excellent. It seems that East read 5™

as asking for a heart control. That makes little sense,

opponents' suit. All in all, it was a sorry auction.

doubled to show a good hand. Leslie rated her hand as too

good to bid 4´. This was a dubious valuation, because her

partner might have doubled on a strong club suit, hoping

that East could bid 3NT. West might have awarded the final

contract a modicum of self-respect, had she bid 5® next.

sorry auction' come to mind. Perhaps I heard them

somewhere recently. In the Venice Cup only four teams

strayed into a slam. The remaining 20 bid and made game.

ANSWERS TO PROBLEMS ON PAGE 22

This time all our deals will come from the

bridge book and you will be told to give a

positive response to 2® when you hold an

ace and a king. Nowadays, you venture a

truly awful, as I see it. What was the rush?

Respond 1´ and you will find out so much

more about partner's hand. You can bid 4´

later, if you wish. No extra IMPs are awarded

opposite and could see a possible slam. She

continued with 5™, expecting partner to bid