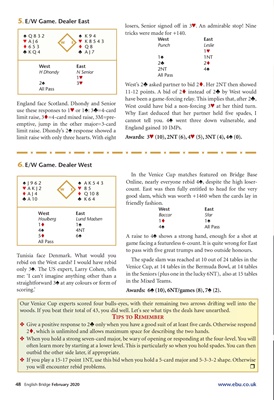 losers, Senior signed off in 3™. An admirable stop! Nine

West's 2® asked partner to bid 2t. Her 2NT then showed

have been a game-forcing relay. This implies that, after 2®,

West could have bid a non-forcing 3™ at her third turn.

Why East deduced that her partner held five spades, I

cannot tell you. 4´ went three down vulnerable, and

In the Venice Cup matches featured on Bridge Base

Online, nearly everyone rebid 4´, despite the high losercount.

East was then fully entitled to head for the very

good slam, which was worth +1460 when the cards lay in

A raise to 4´ shows a strong hand, enough for a shot at

game facing a featureless 6-count. It is quite wrong for East

to pass with five great trumps and two outside honours.

in the Seniors (plus one in the lucky 6NT), also at 15 tables

in the Mixed Teams.

Our Venice Cup experts scored four bulls-eyes, with their remaining two arrows drifting well into the

woods. If you beat their total of 43, you did well. Let's see what tips the deals have unearthed.

D Give a positive response to 2® only when you have a good suit of at least five cards. Otherwise respond

2t, which is unlimited and allows maximum space for describing the two hands.

D When you hold a strong seven-card major, be wary of opening or responding at the four-level. You will

often learn more by starting at a lower level. This is particularly so when you hold spades. You can then

outbid the other side later, if appropriate.

you will encounter rebid problems. r

jump in the other major=3-card

limit raise with only three hearts. With eight

Tunisia face Denmark. What would you

rebid on the West cards? I would have rebid

only 3´. The US expert, Larry Cohen, tells

me: 'I can't imagine anything other than a

straightforward 3´ at any colours or form of