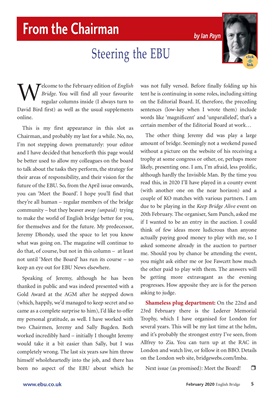 From the Chairman by Ian Payn

elcome to the February edition of English

Bridge. You will find all your favourite

regular columns inside (I always turn to

David Bird first) as well as the usual supplements

This is my first appearance in this slot as

Chairman, and probably my last for a while. No, no,

I'm not stepping down prematurely: your editor

and I have decided that henceforth this page would

be better used to allow my colleagues on the board

to talk about the tasks they perform, the strategy for

their areas of responsibility, and their vision for the

future of the EBU. So, from the April issue onwards,

you can 'Meet the Board'. I hope you'll find that

they're all human - regular members of the bridge

community - but they beaver away (unpaid) trying

to make the world of English bridge better for you,

for themselves and for the future. My predecessor,

Jeremy Dhondy, used the space to let you know

what was going on. The magazine will continue to

do that, of course, but not in this column - at least

not until 'Meet the Board' has run its course - so

keep an eye out for EBU News elsewhere.

Speaking of Jeremy, although he has been

thanked in public and was indeed presented with a

Gold Award at the AGM after he stepped down

(which, happily, we'd managed to keep secret and so

came as a complete surprise to him), I'd like to offer

my personal gratitude, as well. I have worked with

would take it a bit easier than Sally, but I was

himself wholeheartedly into the job, and there has

been no aspect of the EBU about which he

was not fully versed. Before finally folding up his

tent he is continuing in some roles, including sitting

on the Editorial Board. If, therefore, the preceding

sentences (low-key when I wrote them) include

certain member of the Editorial Board at work…

The other thing Jeremy did was play a large

amount of bridge. Seemingly not a weekend passed

without a picture on the website of his receiving a

trophy at some congress or other, or, perhaps more

likely, presenting one. I am, I'm afraid, less prolific,

although hardly the Invisible Man. By the time you

(with another one on the near horizon) and a

couple of KO matches with various partners. I am

due to be playing in the Keep Bridge Alive event on

if I wanted to be an entry in the auction. I could

think of few ideas more ludicrous than anyone

actually paying good money to play with me, so I

asked someone already in the auction to partner

me. Should you by chance be attending the event,

you might ask either me or Joe Fawcett how much

the other paid to play with them. The answers will

be getting more extravagant as the evening

progresses. How apposite they are is for the person

Shameless plug department: On the 22nd and

23rd February there is the Lederer Memorial

Trophy, which I have organised for London for

several years. This will be my last time at the helm,

and it's probably the strongest entry I've seen, from

Allfrey to Zia. You can turn up at the RAC in

London and watch live, or follow it on BBO. Details

on the London web site, bridgewebs.com/lmba.

Next issue (as promised): Meet the Board! r