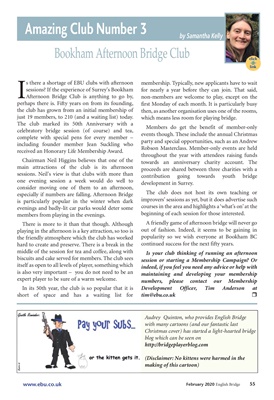 with many cartoons (and our fantastic last

blog which can be seen on

(Disclaimer: No kittens were harmed in the

making of this cartoon)

s there a shortage of EBU clubs with afternoon

sessions? If the experience of Surrey's Bookham

Afternoon Bridge Club is anything to go by,

perhaps there is. Fifty years on from its founding,

the club has grown from an initial membership of

The club marked its 50th Anniversary with a

complete with special pens for every member -

including founder member Jean Suckling who

Chairman Neil Higgins believes that one of the

main attractions of the club is its afternoon

sessions. Neil's view is that clubs with more than

one evening session a week would do well to

consider moving one of them to an afternoon,

is particularly popular in the winter when dark

evenings and badly-lit car parks would deter some

members from playing in the evenings.

There is more to it than that though. Although

playing in the afternoon is a key attraction, so too is

the friendly atmosphere which the club has worked

hard to create and preserve. There is a break in the

middle of the session for tea and coffee, along with

biscuits and cake served for members. The club sees

itself as open to all levels of player, something which

is also very important - you do not need to be an

expert player to be sure of a warm welcome.

In its 50th year, the club is so popular that it is

short of space and has a waiting list for

for nearly a year before they can join. That said,

non-members are welcome to play, except on the

first Monday of each month. It is particularly busy

then, as another organisation uses one of the rooms,

Members do get the benefit of member-only

events though. These include the annual Christmas

party and special opportunities, such as an Andrew

throughout the year with attendees raising funds

proceeds are shared between three charities with a

The club does not host its own teaching or

improvers' sessions as yet, but it does advertise such

courses in the area and highlights a 'what's on' at the

A friendly game of afternoon bridge will never go

out of fashion. Indeed, it seems to be gaining in

popularity so we wish everyone at Bookham BC

continued success for the next fifty years.

Is your club thinking of running an afternoon

session or starting a Membership Campaign? Or

indeed, if you feel you tim@ebu.co.ukce or help with

maintaining and developing your membership