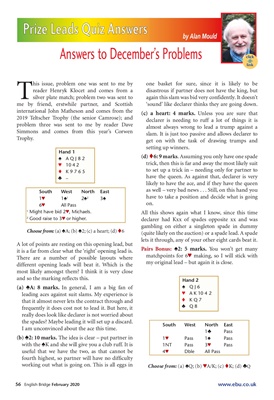 A lot of points are resting on this opening lead, but

it is a far from clear what the 'right' opening lead is.

There are a number of possible layouts where

different opening leads will beat it. Which is the

most likely amongst them? I think it is very close

and so the marking reflects this.

leading aces against suit slams. My experience is

that it almost never lets the contract through and

frequently it does cost not to lead it. But here, it

really does look like declarer is not worried about

the spades? Maybe leading it will set up a discard.

I am unconvinced about the ace this time.

with the ´K and she will give you a club ruff. It is

useful that we have the two, as that cannot be

fourth highest, so partner will have no difficulty

working out what is going on. This is all eggs in

one basket for sure, since it is likely to be

disastrous if partner does not have the king, but

again this slam was bid very confidently. It doesn't

declarer is needing to ruff a lot of things it is

almost always wrong to lead a trump against a

slam. It is just too passive and allows declarer to

get on with the task of drawing trumps and

trick, then this is far and away the most likely suit

to set up a trick in - needing only for partner to

have the queen. As against that, declarer is very

likely to have the ace, and if they have the queen

have to take a position and decide what is going

All this shows again what I know, since this time

declarer had Kxx of spades opposite xx and was

gambling on either a singleton spade in dummy

(quite likely on the auction) or a spade lead. A spade

lets it through, any of your other eight cards beat it.

matchpoints for 6™ making, so I will stick with

my original lead - but again it is close.

his issue, problem one was sent to me by

reader Henryk Klocet and comes from a

me by friend, erstwhile partner, and Scottish

international John Matheson and comes from the

2019 Teltscher Trophy (the senior Camrose); and

problem three was sent to me by reader Dave

Simmons and comes from this year's Corwen