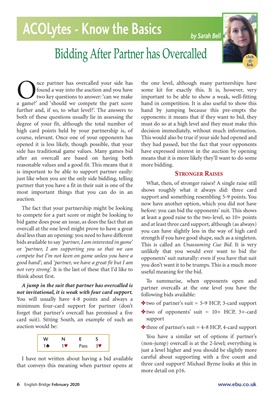 Bidding After Partner has Overcalled

nce partner has overcalled your side has

found a way into the auction and you have

two key questions to answer: 'can we make

a game?' and 'should we compete the part score

further and, if so, to what level?'. The answers to

both of these questions usually lie in assessing the

degree of your fit, although the total number of

high card points held by your partnership is, of

course, relevant. Once one of your opponents has

opened it is less likely, though possible, that your

side has traditional game values. Many games bid

after an overcall are based on having both

reasonable values and a good fit. This means that it

is important to be able to support partner easily:

just like when you are the only side bidding, telling

most important things that you can do in an

to compete for a part score or might be looking to

bid game does pose an issue, as does the fact that an

overcall at the one level might prove to have a great

deal less than an opening: you need to have different

bids available to say 'partner, I am interested in game'

or 'partner, I am supporting you so that we can

compete but I'm not keen on game unless you have a

good hand'; and 'partner, we have a great fit but I am

not very strong'. It is the last of these that I'd like to

A jump in the suit that partner has overcalled is

not invitational, it is weak with four card support.

You will usually have 4-8 points and always a

forget that partner's overcall has promised a five

card suit). Sitting South, an example of such an

the one level, although many partnerships have

some kit for exactly this. It is, however, very

important to be able to show a weak, well-fitting

hand in competition. It is also useful to show this

hand by jumping because this pre-empts the

opponents: it means that if they want to bid, they

decision immediately, without much information.

This would also be true if your side had opened and

they had passed, but the fact that your opponents

have expressed interest in the auction by opening

means that it is more likely they'll want to do some

What, then, of stronger raises? A single raise still

shows roughly what it always did: three card

support and something resembling 5-9 points. You

now have another option, which you did not have

before: you can bid the opponents' suit. This shows

at least a good raise to the two-level, so 10+ points

and at least three card support, although (as always)

you can have slightly less in the way of high card

strength if you have good shape, such as a singleton.

This is called an Unassuming Cue Bid. It is very

unlikely that you would ever want to bid the

opponents' suit naturally: even if you have that suit

you don't want it to be trumps. This is a much more

useful meaning for the bid.

To summarise, when opponents open and

partner overcalls at the one level you have the

You have a similar set of options if partner's

(non-jump) overcall is at the 2-level; everything is

just a level higher and you should be slightly more

careful about supporting with a five count and

three card support! Michael Byrne looks at this in

I have not written about having a bid available

that conveys this meaning when partner opens at