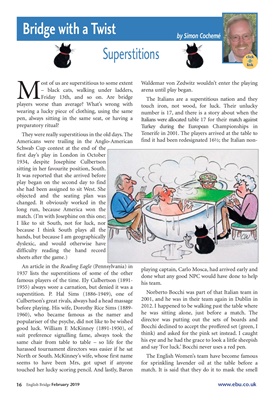 ost of us are superstitious to some extent

Friday 13th, and so on. Are bridge

wearing a lucky piece of clothing, using the same

pen, always sitting in the same seat, or having a

They were really superstitious in the old days. The

Americans were trailing in the Anglo-American

Schwab Cup contest at the end of the

sitting in her favourite position, South.

It was reported that she arrived before

play began on the second day to find

she had been assigned to sit West. She

objected and the seating plan was

changed. It obviously worked in the

long run, because America won the

match. (I'm with Josephine on this one;

I like to sit South, not for luck, nor

because I think South plays all the

hands, but because I am geographically

dyslexic, and would otherwise have

sheets after the game.)

An article in the Reading Eagle (Pennsylvania) in

1937 lists the superstitions of some of the other

always wore a carnation, but denied it was a

who became famous as the namer and

populariser of the psyche, did not like to be wished

same chair from table to table - so life for the

harassed tournament directors was easier if he sat

seems to have been Mrs, got upset if anyone

The Italians are a superstitious nation and they

touch iron, not wood, for luck. Their unlucky

number is 17, and there is a story about when the

Italians were allocated table 17 for their match against

Turkey during the European Championships in

Tenerife in 2001. The players arrived at the table to

find it had been redesignated 16½; the Italian nonplaying

done what any good NPC would have done to help

Norberto Bocchi was part of that Italian team in

2012. I happened to be walking past the table where

he was sitting alone, just before a match. The

director was putting out the sets of boards and

Bocchi declined to accept the proffered set (green, I

think) and asked for the pink set instead. I caught

and say 'For luck.' Bocchi never uses a red pen.

for sprinkling lavender oil at the table before a

match. It is said that they do it to mask the smell