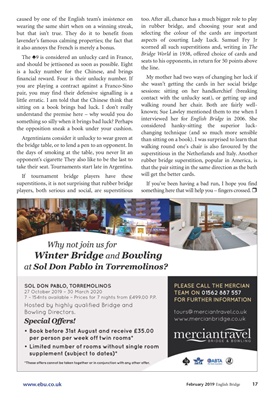 caused by one of the English team's insistence on

wearing the same shirt when on a winning streak,

but that isn't true. They do it to benefit from

it also annoys the French is merely a bonus.

The ´9 is considered an unlucky card in France,

and should be jettisoned as soon as possible. Eight

is a lucky number for the Chinese, and brings

financial reward. Four is their unlucky number. If

you are playing a contract against a Franco-Sino

pair, you may find their defensive signalling is a

little erratic. I am told that the Chinese think that

sitting on a book brings bad luck. I don't really

understand the premise here - why would you do

something so silly when it brings bad luck? Perhaps

the opposition sneak a book under your cushion.

Argentinians consider it unlucky to wear green at

the bridge table, or to lend a pen to an opponent. In

the days of smoking at the table, you never lit an

opponent's cigarette They also like to be the last to

If tournament bridge players have these

superstitions, it is not surprising that rubber bridge

players, both serious and social, are superstitious

too. After all, chance has a much bigger role to play

in rubber bridge, and choosing your seat and

selecting the colour of the cards are important

scorned all such superstitions and, writing in The

Bridge World in 1938, offered choice of cards and

seats to his opponents, in return for 50 points above

My mother had two ways of changing her luck if

she wasn't getting the cards in her social bridge

sessions: sitting on her handkerchief (breaking

contact with the unlucky seat), or getting up and

walking round her chair. Both are fairly wellknown;

Sue Lawley mentioned them to me when I

interviewed her for English Bridge in 2006. She

technique (and so much more sensible

than sitting on a book). I was surprised to learn that

walking round one's chair is also favoured by the

superstitious in the Netherlands and Italy. Another

that the pair sitting in the same direction as the bath

will get the better cards.

If you've been having a bad run, I hope you find

something here that will help you - fingers crossed. r