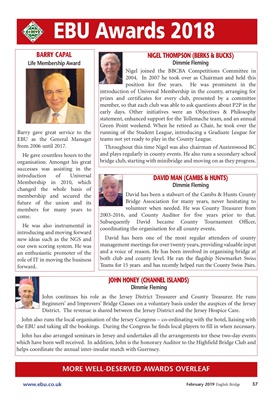 David has been a stalwart of the Cambs & Hunts County

Bridge Association for many years, never hesitating to

volunteer when needed. He was County Treasurer from

coordinating the organisation for all county events.

David has been one of the most regular attendees of county

and a voice of reason. He has been involved in organising bridge at

both club and county level. He ran the flagship Newmarket Swiss

Teams for 15 years and has recently helped run the County Swiss Pairs.

Barry gave great service to the

EBU as the General Manager

He gave countless hours to the

organisation. Amongst his great

successes was assisting in the

changed the whole basis of

membership and secured the

future of the union and its

members for many years to

He was also instrumental in

new ideas such as the NGS and

our own scoring system. He was

an enthusiastic promoter of the

role of IT in moving the business

position for five years. He was prominent in the

introduction of Universal Membership in the county, arranging for

prizes and certificates for every club, presented by a committee

member, so that each club was able to ask questions about P2P in the

early days. Other initiatives were an Objectives & Philosophy

statement, enhanced support for the Tollemache team, and an annual

Green Point weekend. When he retired as Chair, he took over the

running of the Student League, introducing a Graduate League for

teams not yet ready to play in the County League.

Throughout this time Nigel was also chairman of Austenwood BC

and plays regularly in county events. He also runs a secondary school

bridge club, starting with minibridge and moving on as they progress.

John continues his role as the Jersey District Treasurer and County Treasurer. He runs

District. The revenue is shared between the Jersey District and the Jersey Hospice Care.

John also runs the local organisation of the Jersey Congress - co-ordinating with the hotel, liaising with

the EBU and taking all the bookings. During the Congress he finds local players to fill in when necessary.

which have been well received. In addition, John is the honorary Auditor to the Highfield Bridge Club and