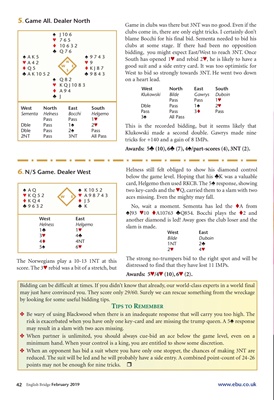 Game in clubs was there but 3NT was no good. Even if the

clubs come in, there are only eight tricks. I certainly don't

blame Bocchi for his final bid. Sementa needed to bid his

clubs at some stage. If there had been no opposition

bidding, you might expect East/West to reach 3NT. Once

good suit and a side entry card. It was too optimistic for

West to bid so strongly towards 3NT. He went two down

on a heart lead.

This is the recorded bidding, but it seems likely that

Klukowski made a second double. Gawrys made nine

below the game level. Hoping that his ®K was a valuable

two key-cards and the ™Q, carried them to a slam with two

aces missing. Even the mighty may fall.

No, wait a moment. Sementa has led the tA from

another diamond is led! Away goes the club loser and the

slam is made. West East

distressed to find that they have lost 11 IMPs.

Bidding can be difficult at times. If you didn't know that already, our world-class experts in a world final

may just have convinced you. They score only 29/60. Surely we can rescue something from the wreckage

by looking for some useful bidding tips. TIPS TO REMEMBER

D Be wary of using Blackwood when there is an inadequate response that will carry you too high. The

risk is exacerbated when you have only one key-card and are missing the trump queen. A 5´ response

may result in a slam with two aces missing.

D When partner is unlimited, you should always cue-bid an ace below the game level, even on a

minimum hand. When your control is a king, you are entitled to show some discretion.

D When an opponent has bid a suit where you have only one stopper, the chances of making 3NT are

reduced. The suit will be led and he will probably have a side entry. A combined point-count of 24-26

points may not be enough for nine tricks. r

score. The 3™ rebid was a bit of a stretch, but