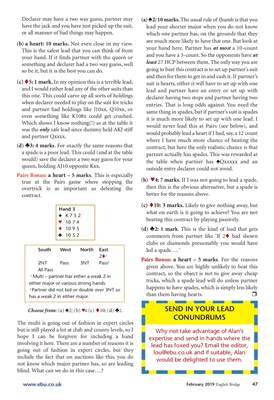 Declarer may have a two way guess, partner may

have the jack and you have just picked up the suit,

or all manner of bad things may happen.

This is the safest lead that you can think of from

your hand. If it finds partner with the queen or

something and declarer had a two way guess, well

so be it, but it is the best you can do.

and I would rather lead any of the other suits than

this one. This could carve up all sorts of holdings

when declarer needed to play on the suit for tricks

Which shows I know nothing(!) as at the table it

was the only safe lead since dummy held AKJ stiff

a spade is a poor lead. This could (and at the table

would) save the declarer a two way guess for your

Pairs Bonus: a heart - 5 marks. This is especially

true at the Pairs game where stopping the

overtrick is as important as defeating the

The multi is going out of fashion in expert circles

but is still played a lot at club and county levels, so I

hope I can be forgiven for including a hand

involving it here. There are a number of reasons it is

going out of fashion in expert circles, but they

include the fact that on auctions like this, you do

not know which major partner has, so are leading

blind. What can we do in this case….?

1 Multi - partner has either a weak 2 in

either major or various strong hands.

2 Partner did not bid or double over 3NT so

has a weak 2 in either major.

lead your shorter major when you do not know

which one partner has, on the grounds that they

are much more likely to have that one. But look at

your hand here. Partner has at most a 10-count

and you have a 3-count. So the opponents have at

least 27 HCP between them. The only way you are

going to beat this contract is to set up partner's suit

and then for them to get in and cash it. If partner's

suit is hearts, either it will have to set up with one

lead and partner have an entry or set up with

entries. That is long odds against. You need the

same thing in spades, but if partner's suit is spades

it is much more likely to set up with one lead. I

would never lead this at Pairs (see below), and

would probably lead a heart if I had, say, a 12 count

where I have much more chance of beating the

contract, but here the only realistic chance is that

partner actually has spades. This was rewarded at

the table when partner has ´Qxxxxx and an

outside entry declarer could not avoid.

then this is the obvious alternative, but a spade is

better for the reasons above.

what on earth is it going to achieve? You are not

beating this contract by playing passively.

clubs or diamonds presumably you would have

Pairs Bonus: a heart - 5 marks. For the reasons

given above. You are highly unlikely to beat this

contract, so the object is not to give away cheap

tricks, which a spade lead will do unless partner

happens to have spades, which is simply less likely

than them having hearts. r

Why not take advantage of Alan's

lead has foxed you? Email the editor,

lou@ebu.co.uk and if suitable, Alan

would be delighted to use them.

SEND IN YOUR LEAD