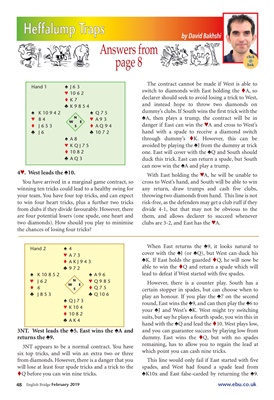 The contract cannot be made if West is able to

switch to diamonds with East holding the tA, so

declarer should seek to avoid losing a trick to West,

and instead hope to throw two diamonds on

dummy's clubs. If South wins the first trick with the

´A, then plays a trump, the contract will be in

danger if East can win the ™A and cross to West's

hand with a spade to receive a diamond switch

through dummy's tK. However, this can be

avoided by playing the ´J from the dummy at trick

one. East will cover with the ´Q and South should

duck this trick. East can return a spade, but South

can now win the ´A and play a trump.

With East holding the ™A, he will be unable to

cross to West's hand, and South will be able to win

throwing two diamonds from hand. This line is not

risk-free, as the defenders may get a club ruff if they

divide 4-1, but that may not be obvious to the

them, and allows declarer to succeed whenever

When East returns the ´9, it looks natural to

´K. If East holds the guarded tQ, he will now be

able to win the tQ and return a spade which will

lead to defeat if West started with five spades.

However, there is a counter play. South has a

certain stopper in spades, but can choose when to

play an honour. If you play the ´7 on the second

your ´J and West's ´K. West might try switching

suits, but say he plays a fourth spade, you win this in

hand with the ´Q and lead the t10. West plays low,

and you can guarantee success by playing low from

dummy. East wins the tQ, but with no spades

remaining, has to allow you to regain the lead at

which point you can cash nine tricks.

This line would only fail if East started with five

spades, and West had found a spade lead from

3NT appears to be a normal contract. You have

six top tricks, and will win an extra two or three

from diamonds. However, there is a danger that you

tQ before you can win nine tricks.

You have arrived in a marginal game contract, so

winning ten tricks could lead to a healthy swing for

your team. You have four top tricks, and can expect

to win four heart tricks, plus a further two tricks

from clubs if they divide favourably. However, there

are four potential losers (one spade, one heart and

two diamonds). How should you play to minimise

the chances of losing four tricks? Answers from