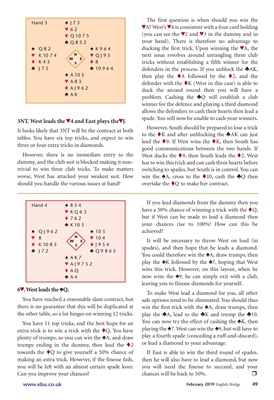 It looks likely that 3NT will be the contract at both

tables. You have six top tricks, and expect to win

However, there is no immediate entry to the

dummy, and the club suit is blocked making it nontrivial

worse, West has attacked your weakest suit. How

should you handle the various issues at hand?

The first question is when should you win the

™A? West's ™4 is consistent with a four card holding

your hand). There is therefore no advantage to

ducking the first trick. Upon winning the ™A, the

tricks without establishing a fifth winner for the

defenders in the process. If you unblock the ®AK,

then play the tA followed by the t2, and the

defender with the tK (West in this case) is able to

duck the second round then you will have a

problem. Cashing the ®Q will establish a club

winner for the defence and playing a third diamond

allows the defenders to cash their hearts then lead a

spade. You will now be unable to cash your winners.

However, South should be prepared to lose a trick

to the tK and after unblocking the ®AK can just

lead the t9. If West wins the tK, then South has

good communications between the two hands. If

West ducks the t9, then South leads the t2. West

has to win this trick and can cash three hearts before

switching to spades, but South is in control. You can

overtake the tQ to make her contract.

You have reached a reasonable slam contract, but

there is no guarantee that this will be duplicated at

the other table, so a lot hinges on winning 12 tricks.

You have 11 top tricks, and the best hope for an

extra trick is to win a trick with the tQ. You have

plenty of trumps, so you can win the ´A, and draw

trumps ending in the dummy, then lead the t2

towards the tQ to give yourself a 50% chance of

making an extra trick. However, if the finesse fails,

you will be left with an almost certain spade loser.

Can you improve your chances?

If you lead diamonds from the dummy then you

have a 50% chance of winning a trick with the tQ,

but if West can be made to lead a diamond then

It will be necessary to throw West on lead (in

spades), and then hope that he leads a diamond.

You could therefore win the ´A, draw trumps, then

play the ´K followed by the ´7, hoping that West

wins this trick. However, on this layout, when he

now wins the ´9, he can simply exit with a club,

leaving you to finesse diamonds for yourself.

To make West lead a diamond for you, all other

safe options need to be eliminated. You should thus

win the first trick with the ´A, draw trumps, then

You can now try the effect of cashing the ´K, then

or lead a diamond to your advantage.

If East is able to win the third round of spades,

then he will also have to lead a diamond, but now

you will need the finesse to succeed, and your