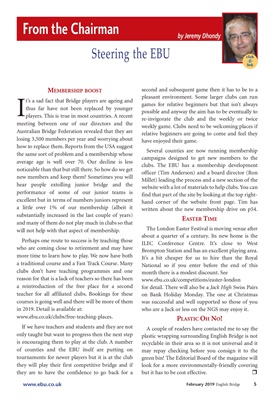 second and subsequent game then it has to be to a

games for relative beginners but that isn't always

possible and anyway the aim has to be eventually to

re-invigorate the club and the weekly or twice

weekly game. Clubs need to be welcoming places if

relative beginners are going to come and feel they

have enjoyed their game.

campaigns designed to get new members to the

clubs. The EBU has a membership development

officer (Tim Anderson) and a board director (Ron

Millet) leading the process and a new section of the

website with a lot of materials to help clubs. You can

written about the new membership drive on p54.

The London Easter Festival is moving venue after

about a quarter of a century. Its new home is the

Brompton Station and has an excellent playing area.

It's a bit cheaper for us to hire than the Royal

National so if you enter before the end of this

month there is a modest discount. See

for detail. There will also be a Jack High Swiss Pairs

on Bank Holiday Monday. The one at Christmas

was successful and well supported so those of you

who are a Jack or less on the NGS may enjoy it.

A couple of readers have contacted me to say the

recyclable in their area so it is not universal and it

may repay checking before you consign it to the

green bin! The Editorial Board of the magazine will

look for a more environmentally-friendly covering

but it has to be cost effective. r

From the Chairman by Jeremy Dhondy

t's a sad fact that Bridge players are ageing and

thus far have not been replaced by younger

players. This is true in most countries. A recent

meeting between one of our directors and the

Australian Bridge Federation revealed that they are

losing 3,500 members per year and worrying about

how to replace them. Reports from the USA suggest

the same sort of problem and a membership whose

average age is well over 70. Our decline is less

noticeable than that but still there. So how do we get

new members and keep them? Sometimes you will

performance of some of our junior teams is

a little over 1% of our membership (albeit it

substantially increased in the last couple of years)

will not help with that aspect of membership.

Perhaps one route to success is by teaching those

who are coming close to retirement and may have

more time to learn how to play. We now have both

a traditional course and a Fast Track Course. Many

clubs don't have teaching programmes and one

a reintroduction of the free place for a second

teacher for all affiliated clubs. Bookings for these

courses is going well and there will be more of them

If we have teachers and students and they are not

only taught but want to progress then the next step

is encouraging them to play at the club. A number

of counties and the EBU itself are putting on

tournaments for newer players but it is at the club

they will play their first competitive bridge and if

they are to have the confidence to go back for a