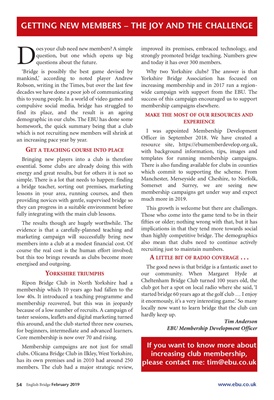 GETTING NEW MEMBERS - THE JOY AND THE CHALLENGE

question, but one which opens up big

questions about the future.

'Bridge is possibly the best game devised by

mankind,' according to noted player Andrew

Robson, writing in the Times, but over the last few

decades we have done a poor job of communicating

this to young people. In a world of video games and

find its place, and the result is an ageing

demographic in our clubs. The EBU has done some

homework, the quick summary being that a club

which is not recruiting new members will shrink at

an increasing pace year by year.

GET A TEACHING COURSE INTO PLACE

Bringing new players into a club is therefore

essential. Some clubs are already doing this with

energy and great results, but for others it is not so

simple. There is a lot that needs to happen: finding

lessons in your area, running courses, and then

they can progress in a suitable environment before

The results though are hugely worthwhile. The

evidence is that a carefully-planned teaching and

members into a club at a modest financial cost. Of

course the real cost is the human effort involved;

but this too brings rewards as clubs become more

Ripon Bridge Club in North Yorkshire had a

membership which 10 years ago had fallen to the

low 40s. It introduced a teaching programme and

membership recovered, but this was in jeopardy

because of a low number of recruits. A campaign of

this around, and the club started three new courses,

for beginners, intermediate and advanced learners.

Core membership is now over 70 and rising.

Membership campaigns are not just for small

members. The club had a major strategic review,

improved its premises, embraced technology, and

and today it has over 300 members.

Why two Yorkshire clubs? The answer is that

Yorkshire Bridge Association has focused on

increasing membership and in 2017 ran a regionwide

campaign with support from the EBU. The

success of this campaign encouraged us to support

MAKE THE MOST OF OUR RESOURCES AND

I was appointed Membership Development

Officer in September 2018. We have created a

with background information, tips, images and

There is also funding available for clubs in counties

which commit to supporting the scheme. From

Manchester, Merseyside and Cheshire, to Norfolk,

Somerset and Surrey, we are seeing new

membership campaigns get under way and expect

This growth is welcome but there are challenges.

Those who come into the game tend to be in their

fifties or older; nothing wrong with that, but it has

implications in that they tend more towards social

than highly competitive bridge. The demographics

The good news is that bridge is a fantastic asset to

our community. When Margaret Hyde at

club got her a spot on local radio where she said, 'I

started bridge 60 years ago at the golf club … I enjoy

it enormously, it's a very interesting game.' So many

locally now want to learn bridge that the club cantim@ebu.co.uk keep up.

If you want to know more about