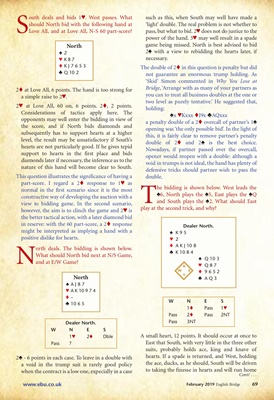 orth deals. The bidding is shown below.

What should North bid next at N/S Game,

should North bid with the following hand at

2t at Love All, 6 points. The hand is too strong for

Considerations of tactics apply here. The

opponents may well enter the bidding in view of

the score, and if North bids diamonds and

subsequently has to support hearts at a higher

level, the result may be unsatisfactory if South's

hearts are not particularly good. If he gives tepid

support to hearts in the first place and bids

diamonds later if necessary, the inference as to the

nature of this hand will become clear to South.

This question illustrates the significance of having a

normal in the first scenario since it is the most

constructive way of developing the auction with a

view to bidding game. In the second scenario,

however, the aim is to clinch the game and 2™ is

the better tactical action, with a later diamond bid

in reserve: with the 60 part-score, a 2t response

might be interpreted as implying a hand with a

A small heart, 12 points. It should occur at once to

East that South, with very little in the three other

hearts. If a spade is returned, and West, holding

the ace, ducks, as he should, South will be driven

to taking the finesse in hearts and will run home

a void in the trump suit is rarely good policy

when the contract is a low one, expecially in a case

he bidding is shown below. West leads the

and South plays the ´2. What should East

play at the second trick, and why?

such as this, when South may well have made a

'light' double. The real problem is not whether to

pass, but what to bid. 2™ does not do justice to the

power of the hand. 3™ may well result in a spade

game being missed. North is best advised to bid

2´ with a view to rebidding the hearts later, if

The double of 2t in this question is penalty but did

not guarantee an enormous trump holding. As

'Skid' Simon commented in Why You Lose at

Bridge, 'Arrange with as many of your partners as

you can to treat all business doubles at the one or

two level as purely tentative.' He suggested that,

a penalty double of a 2t overcall of partner's 1´

opening was 'the only possible bid'. In the light of

this, it is fairly clear to remove partner's penalty

Nowadays, if partner passed over the overcall,

opener would reopen with a double: although a

void in trumps is not ideal, the hand has plenty of

defensive tricks should partner wish to pass the