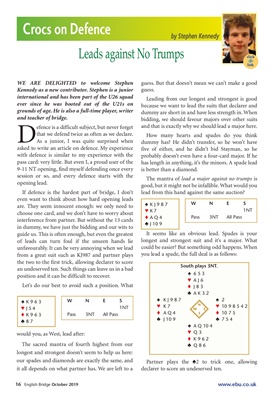 WE ARE DELIGHTED to welcome Stephen

Kennedy as a new contributor. Stephen is a junior

international and has been part of the U26 squad

ever since he was booted out of the U21s on

grounds of age. He is also a full-time player, writer

and teacher of bridge.

efence is a difficult subject, but never forget

that we defend twice as often as we declare.

As a junior, I was quite surprised when

asked to write an article on defence. My experience

with defence is similar to my experience with the

pass card: very little. But even I, a proud user of the

9-11 NT opening, find myself defending once every

session or so, and every defence starts with the

If defence is the hardest part of bridge, I don't

even want to think about how hard opening leads

are. They seem innocent enough: we only need to

choose one card, and we don't have to worry about

interference from partner. But without the 13 cards

in dummy, we have just the bidding and our wits to

guide us. This is often enough, but even the greatest

of leads can turn foul if the unseen hands lie

unfavourably. It can be very annoying when we lead

from a great suit such as KJ987 and partner plays

the two to the first trick, allowing declarer to score

an undeserved ten. Such things can leave us in a bad

position and it can be difficult to recover.

Let's do our best to avoid such a position. What

Leads against No Trumps

would you, as West, lead after:

The sacred mantra of fourth highest from our

longest and strongest doesn't seem to help us here:

our spades and diamonds are exactly the same, and

it all depends on what partner has. We are left to a

guess. But that doesn't mean we can't make a good

Leading from our longest and strongest is good

because we want to lead the suits that declarer and

dummy are short in and have less strength in. When

bidding, we should favour majors over other suits

and that is exactly why we should lead a major here.

How many hearts and spades do you think

dummy has? He didn't transfer, so he won't have

five of either, and he didn't bid Stayman, so he

probably doesn't even have a four-card major. If he

has length in anything, it's the minors. A spade lead

is better than a diamond.

The mantra of lead a major against no trumps is

good, but it might not be infallible. What would you

lead from this hand against the same auction?

It seems like an obvious lead. Spades is your

longest and strongest suit and it's a major. What

could be easier? But something odd happens. When

you lead a spade, the full deal is as follows:

Partner plays the ´2 to trick one, allowing

declarer to score an undeserved ten.